Some four females have again been reported missing by the police in the Western Region.

Forty-two-year-old Augustina Koomson left home on September 12 to work but has since not been seen, police say.

The third victim, 17-year-old Charity Boah, according to police was last seen on September 16 at Ntankoful.

Charity is said to have left home with some personal belongings and GHC200 worth of cash to an unknown location.

Fauzia Aliu, the last victim, left home at about 7:00 pm on September 10 to an unknown location and has since not been seen.

The fifth missing person, 40-year-old Kwame Krah, the only man named in the list, is deaf and dumb according to the police.

Krah left home on September 30 at about 9.30am to Beposo or Shama junction and has since not returned home. 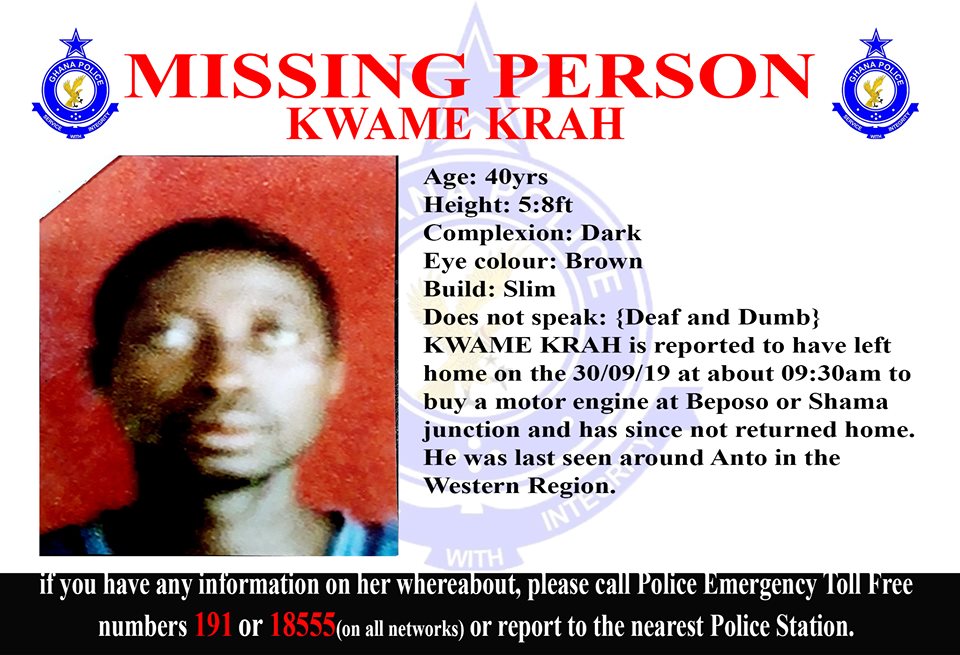 These ‘missing person’ reports add up to the increasing number of people who have allegedly gone missing in the region.

In September 2019, the police broke the hearts of four families and Ghanaians when they announced the death of four girls, in Takoradi, who had gone missing in 2018.

The remains of the girls were found in a septic tank at Kasaworodo, a suburb in Takoradi.

Police believe they are victims of a kidnapping and murder syndicate in the Takoradi area.

The main suspect, a 28-year old Nigerian, Samuel Udoetuk Wills, was arrested in the Western Region, while his accomplice John Orji, was arrested at the Aflao border in the Volta Region.

A third suspect, known only as Chika, have been arrested in Nigeria.

The news of the death of the four girls sparked an uproar as many citizens demanded the resignation of the Director of the Criminal Investigation Department (CID) Maama Tiwaa Addo Danquah who handled the case.