Coach Charles Kwablan Akonnor has announced his starting line up to face Nkana FC in the match-day four of the CAF Confederation Cup. 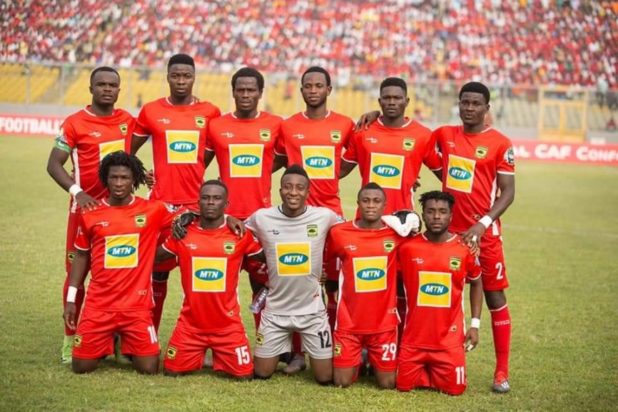 The 44-year-old has made four changes in his team that suffered a 3-1 defeat to the Zambian side last weekend.
Felix Annan has maintained his position in the sticks as Wahab Adams, Augustine Sefah, Daniel Darkwah and Abdul Ganiyu as the back line.
Wahab Adams will make his debut in the competition this afternoon as he replaces Emmanuel Agyemang Badu.
Darkwah also gets the nod as replacement for suspended Amos Frimpong as Sefah return to the squad after losing his place to Habib Mohammed.
Winger Maxwell Baakoh has also been dropped from the starting line up as the midfield has been beefed up with Martin Antwi.
The match will kickoff at 16:00 GMT (4PM)
Below is the full line up against Nkana FC;
Felix Annan, Augustine Sefah, Daniel Darkwah, Abdul Ganiyu, Wahab Adams, Umar Bashiru, Martin Antwi Emmanuel Gyamfi, Kwame Bonsu, Songne Yacouba, Fatawu Mohammed

Previous I was Anas’ first victim in 2002 after he accused me FALSELY-Gabby narrates his ordeal
Next Breach Procurement Code of Ethics, get fired – Adwoa Safo cautions

by;brightwebtv/nana asare barimah Police have arrested a man from Tharaka-Nithi county who went into …