Breaking News
Home / INTERVIEWS / Funeral cracks up as dead man screams ‘Let me out!’ of coffin

Funeral cracks up as dead man screams ‘Let me out!’ of coffin 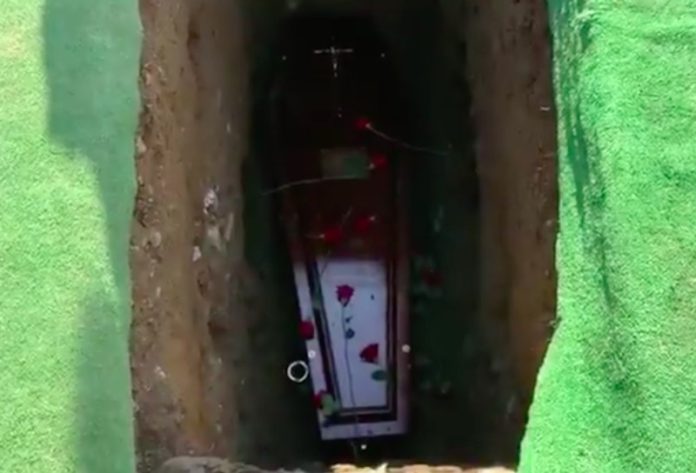 He got the last laugh.

Loved ones at an Irish funeral for Defence Forces Veteran Shay Bradley were shocked — then delighted — when they heard the voice of their late friend calling out from his coffin.

“Hello, hello — let me out!” they heard on Saturday at Bradley’s funeral in Kilmanagh, Leinster, as his casket was lowered into the ground.

Friends and family said the good-humoured officer and father made the recording because he knew he was dying of a “long illness bravely borne” — and wanted “to make his family laugh rather than cry at the funeral.”

Those close to him are now using the hashtag “#shayslastlaugh” to share the story.

“My dad’s dying [sic] wish, always the pranksters,” wrote his daughter Andrea on Facebook, in a post with more than 70,000 views. “Ya got them good Poppabear and gave us all a laugh just when we needed it!! I will love you forever #shayslastlaugh.”

She added on Twitter, “What a man …To make us all laugh when we were incredibly sad…He was some man for one man…Love you forever Poppabear #Shayslastlaugh.”

Other veterans of the Defence Force said the video of their colleague’s funeral “says it all” about military humour.

“Was asked a question the other day, it was what’s the difference between military humour and Civilian humour it’s simple it’s black. This video should say it all,” they posted on Facebook.

Bradley, who died Oct. 8, is survived by his wife, Anne, and children, Jonathan, Susanne, James and Andrea.

Lockdown: Akufo-Addo should not have gambled with the lives of Ghanaians – Haruna Iddrisu