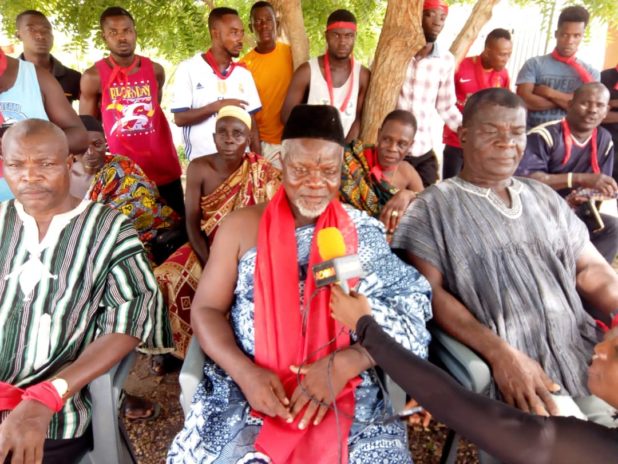 The Acting Odekro of Otuam, Nana Okai Bokoe has dared the Vice Chairman of governing New Patriotic Party (NPP), Mr. Ekow Ewusi to make public evidence to the effect that he has received bribes from the opposition National Democratic Congress (NDC) to do its bidding.

He has threatened to take legal action against the NPP Regional executive and boycott all NPP related events if he fails to produce the evidence of him collecting bribes from the previous government as claimed on a local television network.
Mr. Ekow Ewusi has been given 48-hours to retract and apologise to the chiefs and entire people of Otuam community or incur their wrath thereof according to Nana Bokoe made at a press conference to express his disappointment in the NPP leader.
According to him, he will also use his powers as the  Odekro of the area to ban NPP programmes if he fails to apologise to the chiefs and people of the area within the stipulated period.
It would be recalled that some weeks ago,  that former President John Dramani Mahama as part of his thank you tour paid a courtesy call on them where he (Nana) appealed to him to remember late former President John Evans Atta Mills hometown and develop the area if he (Mahama) gets the nod to rule the nation.
He stated that President Nana Addo Dankwa Akufo-Addo then in opposition came to them and promised them a landing beach if he won the election but has since failed to fulfill that promise.
According to him, he personally went to the office of the Deputy Minister of Fisheries and Aquaculture who doubles as the Member of Parliament (MP) for Ekumfi constituency, Mr. Francis Kingsley Ato Codjoe on the landing beach but told him that Ekumfi Otuam was not on the government’s list of towns to benefit from such facilities.
In view of this, he took the advantage of former President Mahama’s visit to make a passionate appeal to him to provide them with landing beach when he is re-elected in the next 2020 polls.

“Surprisingly, the Central Regional Vice Chairman on Adom TV’s Badwam hosted by Omanhene Kwabena Asante accused me of taking bribe from the opposition National Democratic Congress (NDC) after I was promised to be given a vehicle by then NDC government” which according to the chief, it’s totally false and a deliberate attempt to run him down.