Sorry Mama, I failed you — Last words of final year UDS student who killed himself over academics

It is emerging that Enoch Akondor, the final year BSc Development Planning student of the Wa Campus of the University for Development Studies (UDS) who committed suicide on Saturday night sent a suicide note to his mother in Takoradi and girlfriend. 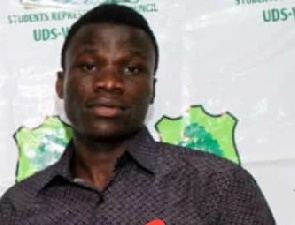 Details of what the suicide note contains remain sketchy but his last Whatsapp status updated at 7:52 pm reads “Sorry Mama I failed you”.

Sources disclosed to MyNewsGh.com that per the suicide note, he apologized to both the mother and girlfriend for his decision and prayed they will forgive him for taking his own life.

It is gathered that Campus Counsellor and the Vice Dean of Students are liaising with the police to unravel the cause of the death which has left colleague of the deceased especially hostel mates in shock.

While the discussion is digressing from academic performance, some lecturers who spoke to MyNewsGh.com on grounds of strict anonymity revealed that CK as called by his peers was not known to be academically weak but had been depressive for some years.

Enoch Akondor believed to be in his late 20s committed suicide at his hostel room on Saturday night by drinking a poisonous substance only for his body to be discovered by colleagues on Sunday morning.

According to them, he is always first to wake up from the hostel but they were shocked he showed no sign as at 6:30 am prompting them to knock severally at his door but there was still no response.

The services of a carpenter fro Bamahu was sought who broke into the room only to be greeted with a dead of the deceased who prior to his death was readying himself to register courses for the trimester on Monday, January 28, 2019.

According to our sources, there was a bottle of a liquid substance suspected to be poison he drank which triggered foam around his mouth and some traces of blood at the scene.

The death of CK has since been reported to the Wa police who confirmed to MyNewsGh.com but indicate that the body has been deposited at the morgue while investigations have commenced into the matter.

Customers of defunct financial institutions to receive payment through CBG

By:brightwebtv.com/nana asare barimah Customers of defunct Savings and Loans, as well as microfinance companies, are to receive …