Three people have appeared in court in Zimbabwe, accused of stealing a suitcase containing $150,000 (£117,600) of cash from the country’s ousted president, Robert Mugabe. 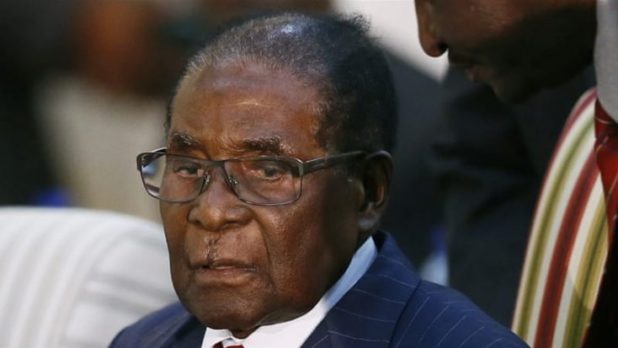 The suspected thieves allegedly spent the money on cars, homes and animals.

A relative of the ex-president, Constantia Mugabe, is among the accused, government-owned media report.

She allegedly had keys to Mr Mugabe’s rural home in Zvimba, near the capital Harare, and gave the others access.

The other suspects were employed as cleaners at the time of the theft, which allegedly happened some time between 1 December and early January.

“Saymore Nhetekwa also bought a Honda… and livestock which included pigs and cattle for an undisclosed amount.”

Up to that point, he had been in power for 37 years, first as prime minister and later as president.

Once famously claiming that a country could never go bankrupt, he was accused of enjoying a lavish lifestyle while presiding over Zimbabwe’s economic collapse.

US dollars are highly prized in Zimbabwe. In theory, the local “bond notes” that banks dispense are equal to the US currency – but in reality they buy much less.

Since retiring, Mr Mugabe has had difficulty walking and has spent several months in Singapore for medical treatment.

It is unclear if he was at home while the theft took place.

The three suspects have been released on bail. The AFP news agency reports that a fourth is still at large.

Previous Amount that Yvonne Nelson, Tracey Boakye, A-Plus and Qweci Oteng are alleged to have invested in Menzgold pops up
Next NAM 1 washing dishes in UK to pay customers – Menzgold spokesperson