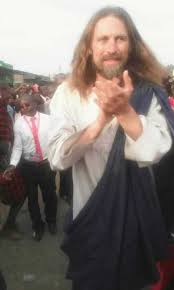 Reports have it that the white man who paraded himself as Jesus Christ and preached in the church of one Kenyan Pastor has been deported ─ with the Pastor being interrogated by the Kenyan authorities.

According to reports, the white man who has a close resemblance with the actor who played the role of Jesus Christ in the movie “The Passion of Christ” is currently not in Kenya.

In addition, the two Pastors who invited the white man have also been arrested for deceiving the masses.

In videos and photos available on the internet, the white man was seen being worshipped by some gullible Christians especially women in Kenya.

Watch the video below.

Previous Parliament to engage public after ‘dropping the chamber’
Next N/R: Robbers attack police at checkpoint, kill one and steal their weapons