Video: Transgender believes it was God’s plan to change from male to female 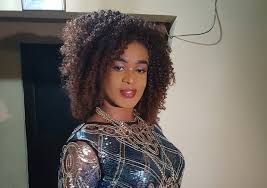 Twenty-six-year-old transgender, Angela Coleman, sharing her journey to become transgender, has disclosed that she believes it was part of God’s plans to change from male to female.
“I wasn’t born this way but circumstances brought me here and I believe it was God’s intention for me to change into a woman someday,” she said.
Speaking in an exclusive interview with Joy News, Angela stated that her decision to change gender was a great and exciting one which she finds worth sharing.

“I was initially scared because I was receiving death threats just because people thought I was gay but now I don’t think there is someone out there who hates me so I feel proud and free-spirited and my family is okay with who I have become.
“I completely feel like a woman and would have killed myself if I hadn’t undergone the surgery,” she added.

Angela revealed she will soon be getting married to a Ghanaian-Belgium based pastor and engineer who is her first lover as she is still a virgin.
“I am attracted to men and I have a boyfriend who is in his late forties. I was surprised because I never believed I would date or marry a pastor but he proposed about eight months ago and it was a very wonderful feeling.

“We are making plans towards a big wedding and his family has accepted me for who I am with his mom coming down on May 27 to see me,” she added.

Watch the full video below…..!