Auction of vehicles of collapsed microfinance companies set for Febuary 3 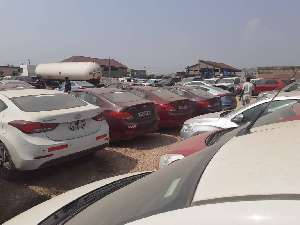 The vehicle brands include Toyota, Hyundai, KIA, Ford, among others

The Receiver of the collapsed 347 microfinance companies and 23 savings and loans and finance house companies has set Monday, February 3 to Friday, February 7, 2020 to auction the first batch of used motor vehicles and motorbikes of the affected companies.

A notice sighted by Graphic Online said the auction would take place at the College of Physicians and Surgeons in Accra at 9am daily.

The vehicle brands include Toyota, Hyundai, KIA, Ford, among others.

An inspection of the items on sale was held on Wednesday, January 29 to Friday, January 31, 2020.

Interested persons who wish to buy the vehicles and motorbikes are expected to pay “strictly cash down at the fall of the gavel,” the statement said.

According to the BoG, the revocation of the licences of these institutions was to get rid of insolvent and dormant institutions that have no reasonable prospects of rehabilitation and have denied depositors access to their deposits, thereby constituting a threat to the stability of the financial system.

In accordance with Section 123(2) of Act 930, the BoG appointed Eric Nana Nipah, a Director of PricewaterhouseCoopers (Ghana) Limited (“PwC”) as Receiver for the purposes of winding down the affairs of the affected microfinance companies.

As of August 2019, Mr Nipah said he had paid close to about Gh?30 million worth of claims to affected depositors.

According to him, he received close to 152,000 depositor claims worth about GH?1.4 billion.

Previous Airbus Bribery Scandal: Former Attorney General denies reports
Next You can sue a lady that refuses to come to your house after sending her transport fare – Police