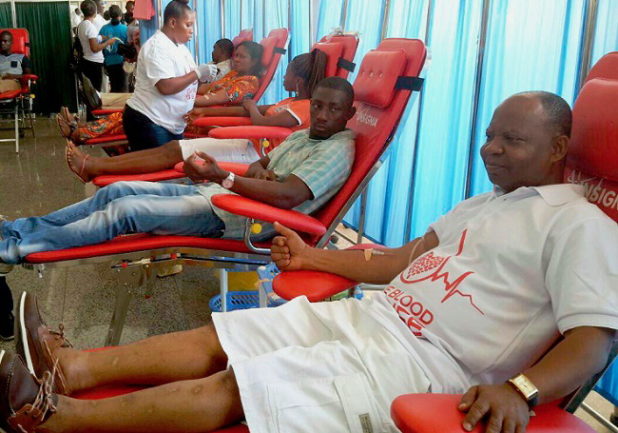 Founder and leader of the Calvary Charismatic Centre (CCC) at, Asokore Mampong, Pastor Ransford Obeng has on Saturday June 8 organised a blood donation exercise as part of his 63rd birthday celebration and social responsibility to help stock the National Blood Bank.

The exercise which too place at the church premises in Asokore Mampong was meant to contribute to the number of blood needed by the National Blood service to save patients including road accident victims, women requiring blood following childbirth and Children with life-threatening anaemia from severe malaria.
Pastor Ransford Obeng, General overseer of CCC in an interview with Otec FM’s C.J Louis said the exercise formed part of his personal benevolence and that of the church’s mission aimed at giving sound health lives to the citizenry. He said for the church to propagate the gospel of Christ, it needed to ensure that the citizenry was in good health to receive Christ’s message hence assisting through the blood donation.
He said as a leader and founder of the Calvary Charismatic Centre together with his members , they were following the footsteps of Christ who did good and still doing good. He called on the public, individuals and other religious bodies to emulate such gesture as blood is priceless.

The exercise attracted a huge number of donors who donated over hundred pints of blood. They were screened of their blood level, blood pressure and pulse.
Pastor Ransford Obeng added that the exercise was also to support the National call of donating blood.
Head of Blood Donor Recruitment of the Transfusion Medicine Unit of the Okomfo Anokye Teaching Hospital (KATH) Mr. Kwame Asenso Mensah, lauded Pastor Ransford Obeng, members and leaders of the Calvary Charismatic Centre for their kind gesture that would go a long way to save lives as they have held such exercise for over 6 years now.