Breaking News
Home / NEWS / Danger looms on Afram River as pontoon runs on one, instead of 2 engines

Danger looms on Afram River as pontoon runs on one, instead of 2 engines 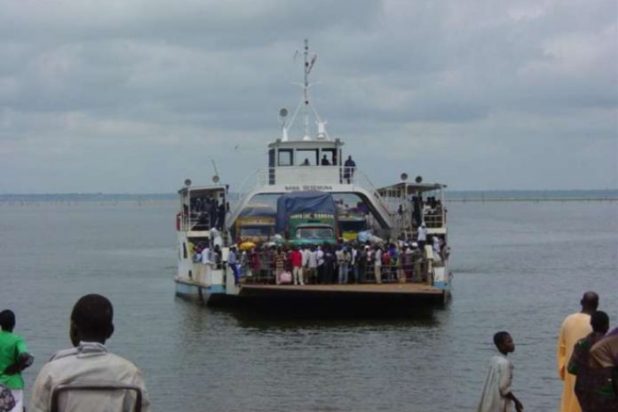 The Afram Lake connects two towns, Kwahu Adawso and Ekyi Amanfrom in the Kwahu South District of the Eastern region.

During the rainy season when the Lake gets flooded, its width stretches to about 5 kilometres whilst it recedes to about 3.9 kilometres during the dry season.

The pontoon that ferries both cargo and passengers across the about 5-kilometre river is running on one engine instead of two.

This, according to regular commuters of the route, makes it delay in crossing over to one side of the Lake. It currently takes about 20 minutes to make one journey, though it used to be shorter.

Vehicles have to board on the reverse so that they can alight when the ferry reaches its destination after making a U-turn during take-off.

This is due to the other faulty engine that makes it travel on only one direction instead of the usual two it does contribute to the delay in conveying passengers and cargo.

Though some people prefer travelling by boat, they admit the pontoon is safer. Some passengers, who shared their fears with Adom News on our visit to the Lake, said they fear for their lives and for the fact that they have no other option, they have to board the pontoon even with one engine.

This was when they were posed with the question, what you would do if the remaining engine gets faulty?

” I don’t know what I’ll do. Everything is in God’s hands because with that, there’s nothing I can do. I just pray they fix the other engine so that the pontoon would be safe,” one man said.

“They should come and build the bridge for us so that all these troubles with the pontoon will end,” a woman also said.

Also, some pupils, who patronise the pontoon daily to school, said the scheduled working time of the pontoon is having a toll on their studies.

“Sometimes you get here and the pontoon has left so you have to board a boat. At times too, the pontoon would not be ready when it is time for school and you’ll have to wait till it moves. We get to school late and do not meet some morning classes,” a pupil averred.

”Sometimes I close from school and the pontoon will close. And if I don’t get the boat, I’ll have to sleep over at the town till the next day,” another pupil added.

Another lady on the ferry said “I don’t even know it is running on one engine and if that’s the case, I can lose my life in case something happens. I pray the authorities get us another pontoon so that when one gets faulty, the other will replace it.”

Station Officer of the Ferry, Gideon Brown told Adom News the Volta Lake Transport Company had purchased the new engine but had not been able to fix it because the crane that is supposed to carry the engine for fixing is faulty and technicians are working on it.

Meanwhile, the District Chief Executive of Kwahu Afram Plains South, George Ofori, assured Adom News measurements for the construction of the bridge have all been completed with details at the Ministry of Transport and work will begin soon.

Previous ‘I’m Back To Manage Shatta Wale For Good’- Bulldog Confirms
Next E/R: 25-year-old gunned down at mining site