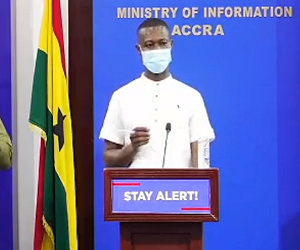 The Chief Inspector of the Accra Regional Office of the Domestic Violence & Victim Support Unit (DOVVSU), Kofi Atimbire has advised complainants of child abuse cases not to be persuaded by pastors and chiefs to withdraw cases reported to them for investigations.

He made the statement earlier today, June 16, 2020, at the Ministry of Information in Accra, as Ghana celebrates the 30th anniversary of the African Charter on the Rights and Welfare of the Child (ACRWC).

According to Mr Atimbire, complainants of child abuse cases are pressurized by people they hold in high esteem in the society to settle the cases with the abusers, in order to protect them. This continues a non-ending cycle of abuse in society.

“Complainants … whoever comes with a child that has been abused, whether physical, sexual and the others, after they have reported and evidence has been gathered and presentation has been made to the court, ready for persecution, then you find these same people backtrack in pursuit of justice for these children. Sometimes the pressure from chiefs, from elders, from pastors, is mounted on these complainants to not continue with the cases,” he said.

He added that complainant sometimes report child abuse cases very late, and gathering evidence during that period is not as easy as gathering them when they are reported earlier.

He advised parents to stop backtracking cases reported to the police to ensure that justice is served for children who have suffered abuse.

“Parents should endeavour to report to us as early as possible. Parents should also desist from the settlement of cases,” he concluded.