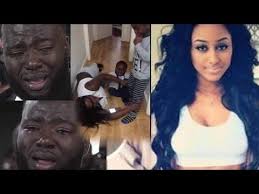 A Ghanaian man based in London has threatened to commit suicide after his wife he brought from Ghana betrayed him.

According to the man, initially, his family was against his marriage to his wife but he went against the orders of his family.

The 40-year old man explained that since his wife arrived in London, her attitude towards him has changed and has become very disrespectful.

He added that he suspects his wife is having extra-marital affairs because she hardly stays at home.

The man who was in tears stated that he is in dilemma as in what to do as he is currently contemplating suicide.

He added that his family warned him against this marriage but their advice fell on deaf ears and is now getting his comeuppance.

He further explained that his wife has associated herself with bad friends who are influencing her negatively.
He revealed that he has a two-year-old child with his wife and at the moment feels betrayed over his partner’s recent attitude.

He made this revelation in a phone-in discussion on Sankofa Radio, London and pleaded with the host to help solve his marital issues.