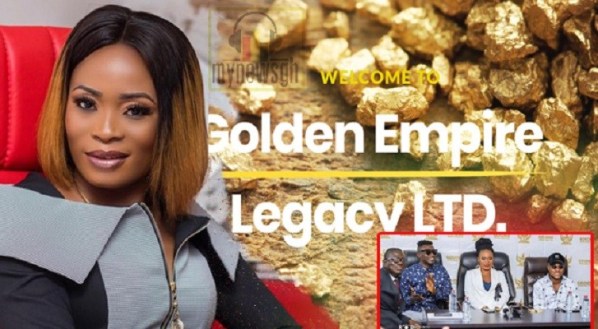 The Securities and Exchange Commission (SEC) has shockingly disclosed that Golden Empire Legacy Limited (GELL)  with one Miss Joana Gyan believed to be a native of Juabeng in the Ashanti Region  as its Chief Executive Officer (CEO), has not been duly licensed by the outfit.

The Director General of the SEC, Daniel Ogbarmey Tetteh revealed to Accra-based Citi Fm that his outfit has received several complaints from the public about the operations of the company but was quick to caution against investing in its mouthwatering schemes.

“We have received some notice through the usual channels by which people notify us of these schemes and we will follow our usual due procedure in advising clients. But it is important for investors to always ask questions and one important question is to find out the underlying investment because when somebody promises a high return and further states that the return is guaranteed, it means that there is high risk involved,” he said.
MyNewsGh.com at the weekend broke the story about nnother suspected Ponzi scheme which goes by the name ‘Golden Empire Legacy Limited (GELL) that surfaced on the Ghanaian scene promising to offer mouthwatering profits to its customers who invest their cash into it.
The investment company claims to buy, trades and stores gold where customers will be offered juicy dividends over a period of time, MyNewsGh.com has uncovered.

MyNewsGh.com checks on the website of the company reveals that GELL which has some things in common with Menzgold with its gold colours and a bag filled with gold sitting on a stool as its logo claims to offer its customers huge sums of money when they buy gold from them.
The company has been legally registered at the Registrar Generals Department but it has emerged that it has not acquired the needed licenses from the Securities and Exchange Commission (SEC).
GELL which claims to have array of companies is likely to compete with gold dealership company Menzgold which has locked up its customers’ monies for some months now.
MyNewsGh.com gathered GELL just like Menzgold which manages some musicians and owns a media company Zylofon, GELL also owns GEM Media.

GELL has signed a 500-dollar contract with Ghanaian Hiplife group aimed at promoting their music internationally.