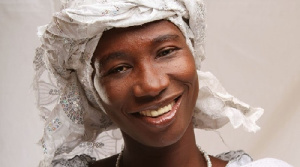 Kennedy Agyapong, the Assin Central MP, has sent out a strong warning to Gospel musician Cecilia Marfo, to be cautious over spitting in people’s mouth as part of healing the sick.

“We cannot allow this woman especially in the era of COVID-19, allow her to be spitting into people’s mouths. It is so disgusting,” the MP said on Net 2 TV, Monday, June 1.

“…Are you mad?” Agyapong charged.

Kennedy Agyapong wondered where Cecilia Marfo, whose chapel is located at Afiayen, a suburb of Greater Accra Region, got that fake healing power from.

“Get ready, I’ll face you. You’re deceiving the public, deceiving the people in this country. When I start with Cecilia Marfo, I don’t want anybody to come and tell me that she is a woman,” the MP warned.

He added that Marfo’s modus operandi is a “disgrace to women”.

Mr. Agyapong warned that if Cecilia Marfo tries challenging him, he will reveal a lot about her.

The MP for some time now has been consistent in exposing some charlatans parading themselves as men of God, who take Ghanaians for granted, and hide behind the pulpit while lavishly amassing wealth from their congregants.

Kennedy Agyapong believes that it is time for him to use his medium to liberate the minds of the vulnerable from some ungodly activities by the obviously fake pastors.

He has said that he has no intention of targeting churches.

“Why will I target churches, why will I target pastors…not all pastors are fake. There are genuine ones but there are fake ones like Obinim, like Badu Kobi. I can talk about these two people because I’ve done the investigation, and I’ve a lot of evidence against them,” Kennedy Agyapong said in a recent interview.