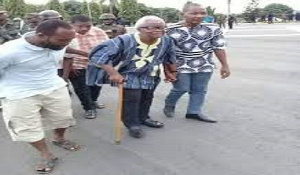 Security agents have mounted a coordinated manhunt for the man behind the so-called breakaway from Ghana of the Volta Region and some parts of the Northern and Upper East regions otherwise called Western Togoland even as another group pops up.

The emergence of the new group with a secessionist project poses few challenges for security coordination and management in that part of the country.

The search for Charles Kormi Kordzordzi, aka Papavi, has assumed a heightened dimension following his daring declaration of the country independent of sovereign Ghana, an act considered a treasonable felony.

Even before security agents end their combing of the Volta Region to locate their quarry through tips and questioning of some residents, another group sharing the ideals of the Western Togoland Homeland Study Group Foundation (HSGF) has popped up.

Daniel Yevugah, who gave hint of the new group, was on air yesterday speaking about their Western Togoland agenda. He did not leave listeners any doubts about the intensity of their passion to break away from sovereign Ghana.

It was a bluff to the security agents, especially the spy community.

Referring to the Concerned Citizens of Western Togoland, Daniel Yevugah said he was the First Vice President of the grouping which is bent on having the Volta Region detached from Ghana.

He claimed that their grouping was a legally registered body to educate their people, who could be indigenes of the Volta Region and elsewhere about what he said “was the untold story of Western Togoland.”

He said although he had heard about Papavi’s HSGF, he did not belong to it “but I share in their dream of a country outside Ghana.” This was major evidence about the existence of a different group sharing in the ideals of Papavi, now a wanted man.

He too could be put on the wanted list of secessionists as security agents get busy in the Volta Region, their superiors in Accra breathing down their necks for results.

The confidence of Daniel Yevugah was not hidden as he told Neat FM in Accra that the activities of his secessionists were legal and not criminal in nature.

In the event of an arrest over their activities, he has called on the authorities to send them to an international criminal court and not to a Ghanaian court.

He accused Ghanaian authorities of persistently ‘concealing’ their identities using the recently created regions as a case in point.

Whereas regions like Ahafo, Bono East were carved out of Brong Ahafo and the like, in the case of the Volta Region the authorities gave the name ‘Oti Region’ instead of his preferred Volta North and Volta South.

This for him was unfair and represented a concealment of the identity of the people of the region as he hosted hard questions from his host.

Daniel Yevugah did not hesitate with his answers, a suggestion about a well rehearsed programme by the leadership of those holding on to the ideals of the secessionist agenda.

He, for instance, stated that “there is no legal document to show that we are supposed to be part of Ghana.”

Daniel Yevugah said he holds a Ghanaian passport because he is only a Ghanaian by birth, saying “my forefathers voted to be in a union with the Gold Coast to form Ghana. I can only be a Ghanaian by birth. Western Togoland and Ghana are two separate countries.”

The contradictions in this segment of his responses only exposed the confusion that surrounds somewhat the thinking of the secessionists.

The union his forefathers voted for with the Gold Coast never materialized, he said, in obvious reference to the plebiscite just before the Union Jack was lowered.

The 1956 plebiscite administered by the UN so the people of Trans Volta Togoland could decide on whether or not to join the Gold Coast for a new Ghana or remain with the French was rejuvenating with portentous consequences.

The security agents, especially the BNI, have attracted the attention of Ghanaians with an eye for security matters following the ease with which Papavi was able to leave the scene of the so-called declaration of independence and remains at large to date.

“What happened was that people gathered as though they were going to perform funeral rites or any programme of no security interest and it was only later that we heard reports that people published some pieces of videos on social media telling the world that a certain section of the region has declared independence,” he said.

“It is not to suggest that we are not on top of our job in the region. Hitherto, you would have seen the said group display paraphernalia; that is not what happened on the day and so we are on the ground and monitoring the situation. We have made some arrests and we will still arrest some more people who were engaged in this criminal act. I can tell you on authority that the region is very safe and peaceful,” he added.

Mahama ‘begged’ me to support his political campaign – Wontumi claims

VIDEO: Anyone who refuses to vote for Akufo-Addo in 2020 is a witch – Owusu Bempah