MenzGold saga: How Ghana’s delegation to Dubai was snubbed

The Herald has obtained some details on the US$51 million gold fraud in which Dubai-based gold buyer; Horizon Royal Diamonds DMCC, which caused the arrest and detention of the owner of Menzgold, Nana Appiah Mensah in Dubai and refused to hand him over to Ghanaian authorities. 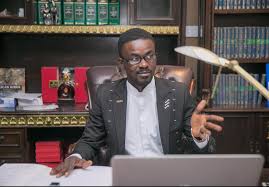 This paper’s information is that Daniel is powerful with connections to the ruling family of Dubai, hence his disrespect for Ghanaian authorities, who had gone there, promising to bring back the Menzgold boss alias NAM1.

Interestingly, The Herald is told that the Ghanaian delegation, could not meet Daniel in Dubai, as he is reported to have travelled out of the country, because he did not want to meet up with the delegation, declaring his readiness to make Nana “rot in Dubai cells”.

In a haste to give a different story, the delegation has announced that NAM 1, will return to court in Dubai on February 2, 2019, but interestingly, the day is a Saturday, and the courts in Dubai don’t work on Saturdays.

This shows the government, through the Police and Economic and Organised Crime Office (EOCO) is not telling the truth on the Menzgold saga.

Again, there are claims that Interpol is yet to capture NAM1 in its database as fugitive. This is because, the real reason why NAM 1 is in Dubai is known to many officials in the government, especially the Flagstaff House, traditional rulers, top lawyers, the senior police officers and EOCO among others.

Three senior officials at EOCO, were mentioned as holding a vital key. They include the Executive Director, KK Amoah, one Bashiru and another by name Walter.

Lawyer Fred Frimpong, captured as the Board Chairman of Menzgold, was also mentioned, as having access to the puzzle, aside Adentunji Adewoye Olorunfemi alias Ade, as Charles Opoku-Darko alias “Chairman”.

An Angolan by name Rodrigues Jose Gomes Maria alias Zerka, is also mentioned to have taken part in the deal. He is identified as worker of Horizon Royal Diamonds DMCC and got a share of the booty which is keeping NAM in the Dubai cell. He has since fled from his employers.

Daniel, is said to be a Palestinian based in Dubai, and had worked his way to the heart of the House of Maktoum, running businesses for the family. Based on this, he is able to have his way around many things including overwhelming access to the Dubai police.

The Herald is further told that while in Ghana, the delegation led by the Minister of State at National Security, Bryan Acheampong, was told that Nana Appiah, was not going to be released to them, however, the delegation decided to gamble mainly to prove to the customers of the Menzgold that the Akufo-Addo government was doing something about the matter.

Ahead of the trip to Dubai, Daniel, had snubbed Ghana’s ambassador to the United Arab Emirate (UAE), Alhaji Ahmed Ramadan, by refusing to speak with him on the release of NAM1, who is needed to curl the wave of the protests sweeping across the country, due to the Menzgold saga.

Insiders also told this paper that, Daniel, is technically holding NAM1 to ransom, hoping to get gold from him before he would let him leave Dubai.

This is because, Daniel, believes NAM 1, has gold in Ghana and keeping him in Dubai, will eventually force him to fly the gold to Horizon Royal Diamonds DMCC and gain his freedom.

The delegation that returned home last Friday, got the Ghana Police Service and EOCO saying that the embattled Menzgold CEO, will only be available in Ghana, upon final determination of his case in Dubai brought against him by Horizon Royal Diamonds DMCC.

NAM1 is facing charges of misdemeanour in the United Arab Emirates (UAE), a statement jointly signed by the police and EOCO has said.

According to the statement, NAM 1, would be made available to authorities in Ghana, pending the outcome of the case in Dubai.

The statement went on to indicate that the embattled CEO, has cooperated with authorities that went to visit him in Dubai and has given them an extensive statement to assist in their investigations into the Menzgold saga for the requisite action to be taken.

The statement was jointly signed by Assistant Commissioner of Police (ACP) David Eklu, the Director-General of the Public Affairs Directorate of the Ghana Police Service and Mr Abu Issah, acting Head of the Legal and Prosecution outfit of EOCO, and copied to the Ghana News Agency.

“Mr Mensah was cooperating with EOCO as part of its investigations into a possible breach of Banks and Specialised Deposit-Taking Institution Act, 2016, (Act 930) as reported to it by the Bank of Ghana (BoG).

“Upon the breakdown of cooperation, EOCO employed other strategies, including the use of associates and collaborating with other security agencies to make him available for further investigations”.

It said, the Emirati authorities employed similar methods in getting Mr Appiah Mensah to visit the UAE where, he was, subsequently, apprehended.

According to the statement, the delegation from Ghana went to Dubai to determine the nature of the legal processes against the accused person in the UAE and work on extradition processes to get him back to Ghana.

He is due to return to court in Dubai on February 2, 2019. Interestingly, this day is a Saturday, and the courts in Dubai don’t work on Saturday.

USE THE “IRIS” AS BIOMETRIC MODALITY FOR THE NEW VOTER REGISTER- LECTURER SUGGESTS.