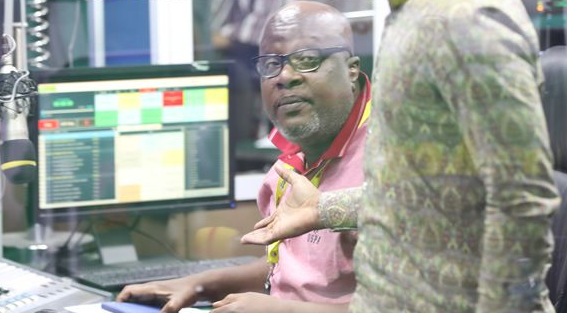 The former described the latter as a ‘hypocrite’ following a leaked tape recording of the National Chairman of the NDC, Samuel Ofosu-Ampofo.
According to him, “these bunch of hypocrite journalists will never play leaked tapes on their shows so far as they have negative repercussions on the NPP. However, they are quick to play leaked tapes that involve the NDC like we are seeing today”.
On Friday’s edition of Peace FM’s morning show, Sammy Gyamfi walked into the Studios of the station to the amazement of the host.

“What are you doing on my show after insulting me?” Kwami Sefa Kayi asked.
“Honestly, I don’t want you on my show . . . you can’t insult me and then appear on my show. You impugn my integrity, called me names . . . and you didn’t have the courtsey to correct and you don’t want me to say it? . . . honestly, I am not happy you are here,” he told the NDC National Communication Officer.
This went on for a while and after several calls from other panelists on the show for him to apologize, he did.