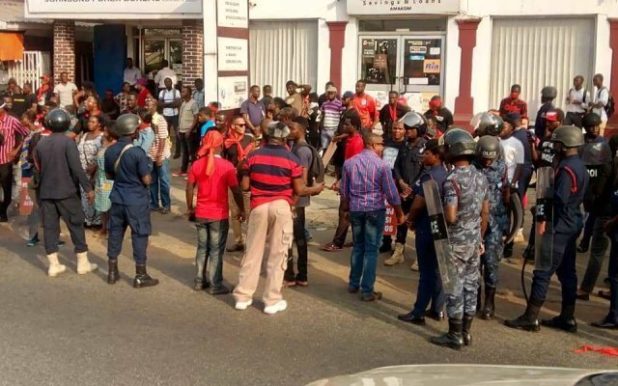 Scores of aggrieved customers of gold dealership firm Menzgold Ghana Limited have renewed their agitations with a threat to besiege the headquarters of the Criminal Investigation Department (CID) of the Ghana Police Service to demand the whereabouts of the CEO of troubled firm, Nana Appiah Mensah (NAM1).

The angry customers expressed rage on Wednesday, 17 July 2019 at the Accra International Press Centre when they channelled their request to the CID through the media.

They say they want to question NAM1 over their locked-up funds at Menzgold and his payment plan.

The group said its members want proof that NAM1, who is in police custody awaiting trial for fraud, is truly in Ghana.

They have, therefore, tabled a raft of demands before the government, adding that any attempt to disregard their concerns will lead to a vote against President Nana Akufo-Addo in the upcoming 2020 elections.

The spokesperson for the aggrieved customers, Mr Fred Forson, told Class FM that: “It seems everything is shrouded in secrecy”.

He raised issues about why the media blackout of NAM1’s trial, adding: “If the reports say that he [NAM1] is in police custody, then we need to go to the CID headquarters so that they can give us access to see our man ourselves and possibly ask him a few questions about the fate of our investment”.

NAM1 has been charged by the police and remanded to reappear in the Accra Circuit Court on 26 July 2019 after his arrival in Ghana.

He is facing charges of defrauding by false pretence and two counts of abetment to carry out banking business without a licence contrary to Section 6 (1) of the Banks and Specialised Deposit-taking Institutions Act, 2016 (Act 930).

His Brew Marketing Consult and Menzgold Ghana Limited have also been slapped with charges of defrauding by false pretence contrary to sections 20 (1) and 13 (1) of the Criminal Offences Act, 1960 (Act 29).

The remand was granted by the court upon the request of the police in order for them to complete investigations into the case in two weeks.

He was arraigned on Friday, 12 July 2019 after spending the night in the custody of the Criminal Investigations Department (CID) of the Ghana Police Service following his arrival in Ghana from Dubai the previous day.

The young Ghanaian businessman had been in the custody of Dubai authorities since December last year. He was arrested during his sojourn to the Emirates to collect some hefty amount owed his company by a businessman there.

NAM1, who is being sought after by both his thousands of aggrieved clients whose investments have been locked up with the company since August last year; as well as the government of Ghana, won two court cases against his rival businessman while in Dubai.

An Interpol red alert has been on NAM1’s head for several months since his detention in Dubai.

The Supreme Court of Dubai recently upheld a victory of the businessman in a lower court which ordered his Emirati businessman rival to pay the Ghanaian some $39 million and compensation.

USE THE “IRIS” AS BIOMETRIC MODALITY FOR THE NEW VOTER REGISTER- LECTURER SUGGESTS.

By:brightwebtv.com/nana asare barimah Nana Appiah Mensah Listen to the Article President of the Coalition of …