Sniper Would’ve Wiped Out Tigger Eye PI If Ghana were To Be USA, – Effah Dartey

Former Member of Parliament (MP) for Berekum constituency Captain (rtd) Nkrabea Effah Dartey is of the view that Ghana’s undercover journalist Anas Aremeyaw Anas and his crew from Tiger Eye PI would have been wiped off with a sniper if Ghana was the United States of America (USA), mynewsgh.com has filed. 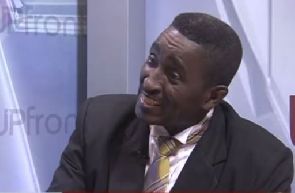 He disclosed that the modus operandi of Anas in unravelling corrupt practices would not be allowed in such countries which reinforces his point.

“Anas and his gang would have been wiped in any other country. If it is outside Ghana especially in America you cannot do the kind of things Anas is doing and be left to go scot-free, never! The law works there well so whatever you do, you are very cautious. If it had been outside the country Anas masked his face like he does in Ghana, someone would have contracted snipers to eliminate him quickly”, he disclosed on Accra-based

Continuing his stance against what he described as unethical conduct by Anas and his team, he said “In every country if there will be peace, the law must work. So if you get up and take a hidden camera going round and trapping people to see if they will take bribes and video them secretly and premiere to the public to the extent that some die…my classmate a high court judge died because of this. It is not fine, it is not good, it is not correct. We must not encourage it. Look at Kwesi Nyantakyi who was rising to become a FIFA president you have destroyed him. Look at Ghana Sports, football league nothing has happened the whole year just because of one man who has arrogated himself the powers of saint. Meanwhile he goes round portraying himself as a saint who has never taken bribe”.

By:brightwebtv.com/nana asare barimah The Chairman of the Peoples National Convention, (PNC) Bernard Mornah  and his …