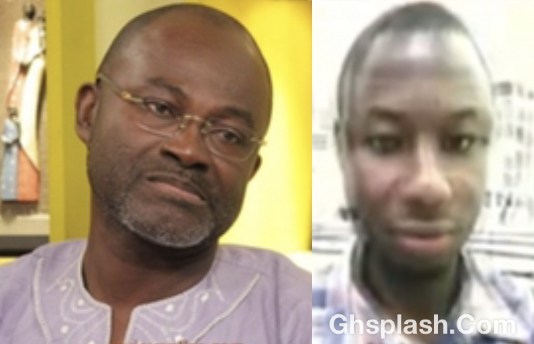 A Kumasi based Human Rights organization, Operation Save the Suffering Masses(OSSM) have written to the Director General of the Criminal Investigation Department (CID) of the Ghana Police Service, Maame Yaa Tiwaa to arrest Member of Parliament for Assin Central, Hon Kennedy Ohene Agyapong and put him before court for putting the late investigative journalist, Ahmed Suale’s life in danger.

According to a letter dated 15th April, 2019 and sighted by brightwebtv.com /Odiasempa Kwaku Mensah, OSSM said it has been monitoring the utterances coming up after the cruel killing of Tiger Eye PI’s Ahmed Suale and believes the difficulties the CID of the Ghana Police Service is facing to go to the bottom of the case is the frustration they(CID) have allowed Mr Kennedy Agyapong to create.

If the CID avoided the frustrations Mr Agyapong created by arresting and charged him for inciting the public against Mr Ahmed Suale’s life by advertising for Ahmed’s attack, all these hullabaloo would have been calmed down, the letter quoted.

OSSM said if Hon Kennedy Ohene Agyapong is not properly arrested and put before court for advertising for mob attack on an innocent person, Ahmed Suale, a journalist, Ghana and for that matter the Ghana Police Service of which Maame Yaa Tiwaa is the Director General of the Criminal Investigation Department (CID) will not be respected both locally and internationally.

Paragraph three of the letter quoted that the existence of Mr Julian Assange is an indication that Mr Agyapong has put Ghana at the black spot in the world by advertising for mob attack on an innocent journalist, Ahmed Suale.

The letter which was signed by the spokesperson for Operation Save the Suffering Masses(OSSM), Nana Kwasi Kwarteng reminded the Director General of the CID, Maame Yaa Tiwaa not to forget that the Assin Central legislator, Hon Kennedy Agyapong is a Member of Parliament and none of his counterparts in London, New York, Abuja etc can do such an advertisement and go scot free and therefore, calling on her high office as Human Rights activist to arrest and prosecute Mr Agyapong for putting Mr Ahmed Suale’s life in danger through advertisement.

Copy of the letter  below 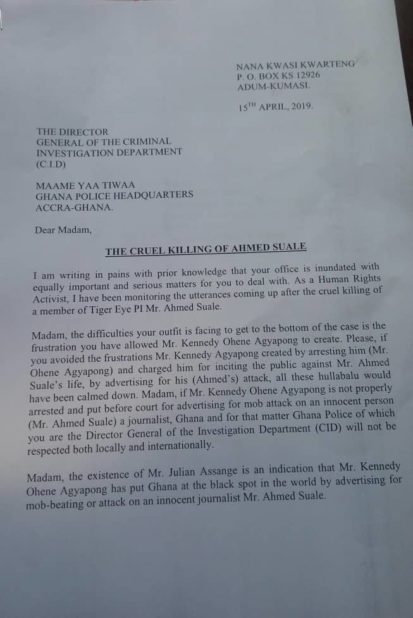 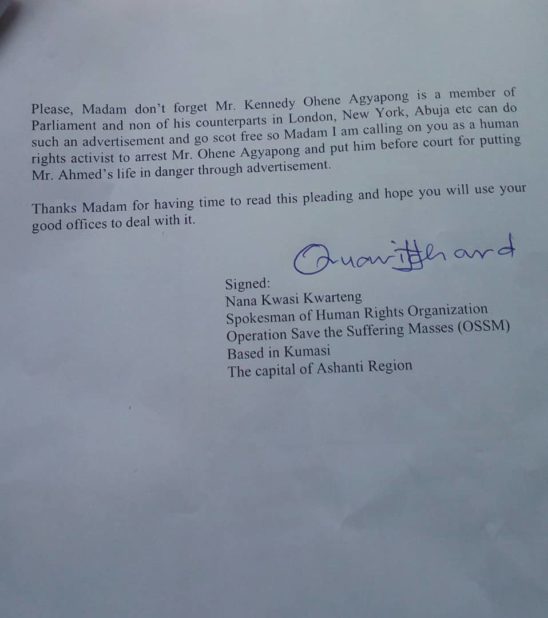