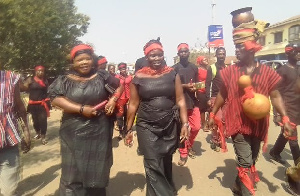 Members of the council on the streets of Sunyani

The Sunyani Traditional Council in Bono Region, yesterday, performed a series of rituals in the business district of Sunyani and invoked names of deities to unravel the details behind the recent killings in the municipality.

Sunyani has been bedevilled with strange murders with some of the victims being lunatics and women, triggering rumour that they are for rituals.

The scene attracted many as chiefs wearing black garments alongside red bands joined by members of the Sunyani Youth for Development Association paced the streets of the business districts. They held red candles and pots with flames and broke eggs at intersections.

Motorists stopped to behold the spectacle and in spite of the traffic jam the scene created, the police looked on helplessly.

The year has already witnessed the murder of two persons, a madwoman and a shoemaker. Two persons have been arrested for the murder of the latter and are already standing trial. Residents believe they are not the only persons behind the murders.

Many are disappointed in the police for not being able to stop the murders so far hence the people’s resort to the deities.

At the end of the rituals, a ram was slaughtered followed by incantations.

Previous RAWLINGS URGES TOGO TO UPHOLD DEMOCRATIC PRINCIPLES
Next VIDEO: “Akufo Addo Is Now Like A Tree Without Roots Over His Involvement In The Galamsey Saga” – Kennedy Agyapong Fires