2020 elections will be ‘fire for fire’, not ‘boot for boot’ – Victor Smith reveals NDC plans 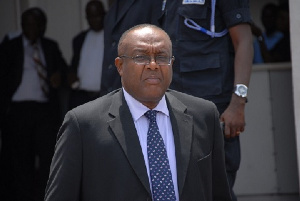 Former Ghanaian High Commissioner to the United Kingdom, Emmanuel Victor Smith says his party is ready to transcend its flagbearer’s ‘boot for boot’ mantra and activate operation ‘fire for fire’, if the ruling New Patriotic Party (NPP) goes ahead to use persons it has secretly recruited into the country’s security services in the December general elections.

According to the NDC stalwart, the ruling NPP as it stands is pushing its vigilantes into various security agencies with the intention of using them to police the December elections instead of using professionals.

“In fact, they’re recruiting and I’m stating on record that they’re still recruiting people without advertising. In the last year alone they’ve recruited about 1500 prison officers, it was never advertised. It was people who come from their constituencies and branches, NPP people who are being recruited,” he told abcnews.

“They go to the borstal institute and they’ve done medical checks, they’re given letters appointing them as staff of the prisons of Ghana. And they’re doing the same thing for the military and for the police. My concern is that the intention is to use these ones to police the elections instead of the regular professional men and women of the Ghana Armed Forces and the police.”

Mr Smith added that his party which is tougher than the NPP will be ready face them if they should go ahead with such a plan.

“When President Mahama said boot for boot, I am mentioning fire for fire,” he said. “Those guys misbehave we will face them on election day, let the worse happen because we cannot allow one party to design some communist inferior tactics to hold on to power whether the people like it or not, that won’t happen.”

“So they should listen and listen well, you bring chaos into Ghana, the professionals will take over the country and that’s their business. You kick me I kick you, you fire me I fire you back, that’s what I mean so don’t misbehave.”