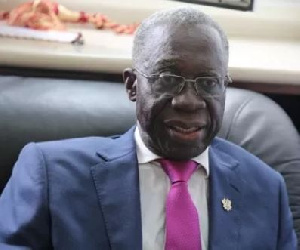 The acting Auditor-General(A-G), Johnson Akuamoah Asiedu, has expressed satisfaction after the inspection of documents in the office of the Senior Minister, Yaw Osafo-Maafo, on the US$1M Kroll and Associates Limited case

This development comes a day after the Auditor-General, Daniel Domelevo began his 167 days ‘forced’ leave following an order from the president.

The Auditor-General, Daniel Yaw Domelevo, reacting to his forced leave, on July 1, revealed that the Supreme Court had given his lawyers 10 days from 24th June 2020, to inspect the Senior Minister’s documents on the Kroll deal before returning to the court.

A signed letter by the acting Auditor-General, addressed to the office of the Senior Minister and sighted by the GhanaWeb stated that “reference to our letter dated 25/6/2020 and yours dated 30/6/2020 and the inspection of documents in your office on 2/7/2020”.

“We wish to state that we are satisfied with the processes and therefore propose that the lawyers inform the Supreme Court accordingly to enable both parties go back to the High Court to continue with the proceedings in that court”.

In 2019, Social Commentator and controversial musician Kwame Asare Obeng, popularly known as A Plus, asked the Supreme Court to declare as illegal, the government’s decision to pay $1m to UK-based Company Kroll Associates.

A-Plus wanted the apex court to essentially back the position taken by the Auditor-General, Daniel Domelevo.

This was after the Auditor General, claimed that Yaw Osafo-Maafo and the Finance Ministry colluded to pay UK firm, Kroll and Associates Limited, US$1 million for no evidence of work done.

The UK firm in 2017 was contracted by the Senior Minister to recover assets from identified wrongdoers, among others.

According to the Senior Minister, the firm had done the work it was contracted to do and that there was enough evidence of work done.

But the Auditor-General in its annual report on Public Accounts of Ghana (PAG) as of 31 December 2018 on the Ministries, Departments, and Agencies (MDAs) stated that: “during our review of the contract with Kroll Associates, we noted that though there was no evidence of work done, the ministry, in 2018, paid an amount of US$1 million (the equivalent of GH¢4,890,000) to the company”.

The report added that there were inconsistencies in some of the documentation. It said, for instance, “though the contract was signed in September 2017, some of the invoices attached to the payment vouchers predated the award of the contract”.

The A-G’s report stated that in view of the non-performance of Kroll Associates in executing the contract, the agreement should be “abrogated and any money paid to the company recovered immediately”.