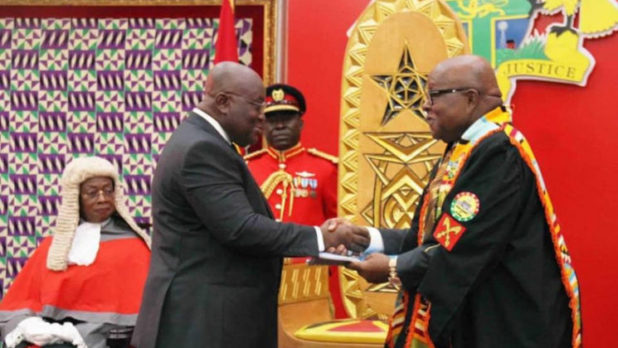 Speaking during the unveiling of the design of the project last week Prof. Oquaye disclosed the president will be the one to cut the sod for the commencement of the project.

“The President in principle has actually agreed to come and cut the sod the moment we are ready. So, you could see that there’s a lot of goodwill for this project,” Prof. Oquaye said.

The construction of the new chamber has come under serious attack with civil society groups, including MPs and Ghanaians kicking against it.

The Africa Centre for Parliamentary Affairs (ACEPA) observed that constructing new parliamentary should not be a priority for Ghana.

“I think we have a number of burning priorities as a nation. Especially given that this is coming on the back of the hue and cry that characterised the cost of the refurbishment and renovations that took place in the current chamber when Rt. Hon. Doe Adjaho was Speaker of the 6th Parliament,” ACEPA’s Executive Director Rasheed Draman told Accra based Joy FM.

But in a rare appearance on morning TV on Wednesday, 03 July 2019 Mensah Bonsu who is also the Minister of Parliamentary Affairs defended the need for the new chamber. According to him, the argument that the new chamber is not of priority is baseless.

Speaking on GHOne TV’s GH Today, he said: “As a country, we are not out of the woods yet in spite of the quality…quantity of various shades of improvement that we are adding to the lives and living standards of our people. We are not there yet. We are not out of the woods, but tell me, we do know that the basic needs of a human being to start with is food, clothing and shelter. Whenever have we been able to achieve this before we started building our stadia or our national theatre?

The second deputy Speaker Alban Bagbin touching on the development warned on the going attack on MPs over the 450 capacity chamber project is eroding the country’s pillar of democracy.

“It is our duty to educate Ghanaians on this matter because what is happening now eroding the pillar of democracy in the country which is parliament and so we should be courteous and careful and cautious about how we talk about members of parliament and parliament as an institution. I hope that members themselves will not contribute to that negativity.”