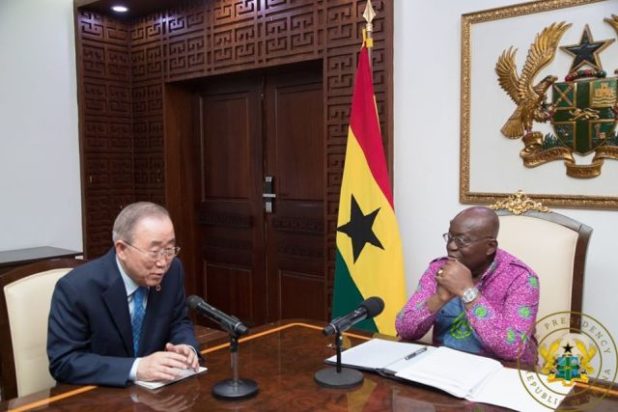 Ghana has made great economic achievements under President Nana Akufo-Addo, a former Secretary-General to the UN Ban Ki-Moon has observed.

Paying a courtesy call on Mr Akufo-Addo at Ghana’s Jubilee House ahead of his participation in the Africa Netpreneur Prize Initiative, an entrepreneurial programme in Africa led by the Jack Ma Foundation of Chinese billionaire Jack Ma, the former UN chief said: “Under your leadership, your country is making great strides in economic development”.

“I understand that IMF has predicted that you will have almost 7% annual growth and this is highly commendable,” Ban Ki-Moon told Mr Akufo-Addo, adding: “Many European countries including Korea are growing just about 2 to 3 per cent. I hope you will make great strides in economic and social development”.

Mr Ban Ki-Moon also acknowledged the work of his predecessor Kofi Annan at the UN and said he would be visiting the late UN Chief’s tomb to pay his respects.

For his part, President Akufo-Addo said Mr Ban Ki-Moon lived up to expectation at the UN.

“We met when you were the Foreign Affairs Minister of Korea and I was then the Foreign Affairs Minister of Ghana. We struck up a good relationship and that is what led me to be almost your campaign manager. I never regretted because your performance as Secretary-General was something that vindicated all of us who believed in you,” Mr Akufo-Addo noted.