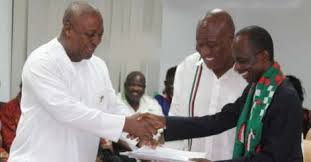 As the build-up to the 2020 general elections intensifies, exclusive information available to The Ghana Report (TGR) indicates that former President John Dramani Mahama is considering General secretary of the opposition National Democratic Congress, Johnson Kwadwo Asiedu Nketia as his running mate for the eagerly anticipated contest.

The Chief Scribe of the NDC, Asiedu Nketia, popularly known as ‘General Mosquito’, has jumped to the forefront of the running mate contest in the last few days, TGR gathers due to his rich experience, affability and seeming ability to mobilize the grassroots.

Our sources tell us former President Mahama is likely to settle on Asiedu Nketia as his running mate. The decision, TGR is informed, stems from the party’s desire to shore up its votes in the rural communities of the country ahead of the 2020 elections.

The choice of Asiedu Nketia means the NDC would then have met the north-south ticket arrangement for a flagbearer and running mate that has been synonymous with the two leading political parties here in Ghana since the return to multi-party democracy in 1993.

Party bigwigs have been tight-lipped on the issue as one of them who preferred to remain anonymous emphasized that the selection of a running mate was the preserve of the flagbearer.

“It is the flagbearer who will select his running mate in consultation with the Council of Elders. Anybody the flagbearer settles on as the running mate must have the capacity to act in the absence of the president or must have the capacity to act. Our General Secretary has served the country in various capacities; he has served as Member of Parliament, Deputy Minister and General Secretary.

As General Secretary, he has won some elections for the party and so looking at his credentials, he has the capacity to do the job when given the opportunity. What I have not done now is to do an analysis to find out what his nomination would mean for the NDC ticket into the 2020 election,” one party source observed.

With barely 18 months to go for the presidential and parliamentary elections, the governing New Patriotic Party (NPP) will have the sitting president, Nana Addo Dankwa Akufo-Addo contesting the presidential election with Vice President Dr. Mahamudu Bawumia partnering him as his running mate.

Many political pundits have attributed the electoral victory of the NPP in the 2016 presidential election partly to the role played by Br. Bawumia in the several ‘Economics Lectures’ he delivered on various campuses both locally and internationally.

The NDC, according to party insiders, should be able to come up with a running mate who could match up squarely to the sitting Vice President when it comes to economic issues. That situation threw up a recommendation in the person of Alex Mould, former GNPC CEO, our sources tell us.

Other notable names on the radar which the NDC bigwigs say could be given the opportunity should General Mosquito be pushed aside include former Vice Chancellor of the University of Cape Coast and former Education Minister under Mahama’s administration, Prof. Jane Naana Opoku Agyeman, Ambassador Victor Smith and Sylvester Adinam Mensah. However, the main contenders for the slot as of this publication, our sources reveal, are Johnson Asiedu Nketia and Prof. Jane Naana Opoku Agyeman.

Born on December 24, 1956 at Seikwa in then Brong Ahafo Region, Mr. Asiedu Nketia, started his political career when he was elected to represent Seikwa at the first Wenchi District Assembly in 1989.

He served as a Member of Parliament (MP) for the Wenchi West Constituency for 12 years. As a parliamentarian, he served on several committees, including Appointments Committee, Finance Committee, Public Accounts Committee, Chairman, Mines and Energy Committee, and Minority spokesperson on Food, Agriculture and Cocoa Affairs.

He was also appointed by Jerry John Rawlings as Deputy Minister of Food and Agriculture In-Charge of Crops from 1997 till the NDC lost power and left office in 2001.

In December 2005, he was elected by his party delegates to become the third General Secretary of the NDC. He has since held onto the position till now.