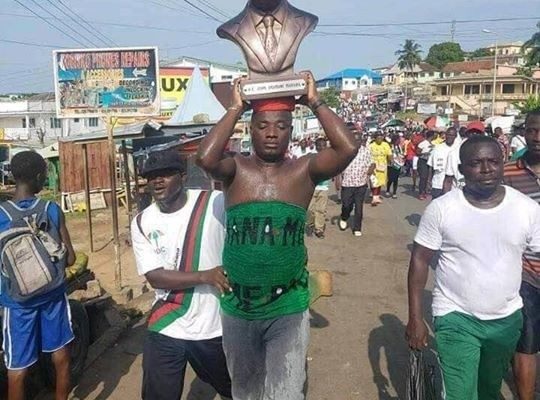 Appiah Stadium days ago, started a crusade for the current New Patriotic Party (NPP) administration to make sure the NDC businessman Seidu Agongo is jailed accusing him of being corrupt.
It is however emerging that the NDC activists who is noted for begging party bigwigs for money all the time, turned his guns at Alhaji Agongo after the latter failed to sponsor his (Appiah Stadium) son’s birthday.

In the tape in possession of MyNewsGh.com, a sober Appiah Stadium is heard pleading that if he does not come to his aid, he would be embarrassed because guests for the birthday arrived and there was nothing to serve them twenty minutes to the start of the event.

It also emerged that the celebration coincided with the 2-day tour of former President John Dramani Mahama to the Western Region recently in which he is heard lamenting how he is unable to reach him on phone in order to direct an alternative source to sort him out.
“Alhaji Agongo the programme is about starting in 20 minutes if you do not help me I be disgraced at the birthday of my daughter. I am trying to reach old man in the Western Region but his lines are not going through…kindly help and I will inform President Mahama about your support”, he said.

When his pleas were not heeded to, he threatened to launch a crusade against Alhaji Seidu Agongo wondering why he would refuse to support the birthday celebration of his son he named after John Mahama.