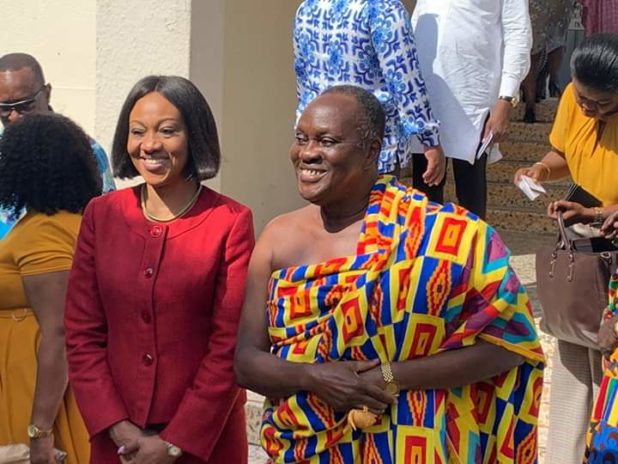 Members of the Council of State have urged the Electoral Commission (EC) to explore ways of ensuring that only the vibrant political parties remain on the Commission’s registry.
Unanimously, they said the majority of the parties were dormant and did not have representation in the form of offices at the local level and recommended the need to undertake a cleanup exercise in the confines of the law to strike out the inactive parties.

These suggestions were made on Thursday when Mrs Jean Mensa, the Chairperson of the Electoral Commission, led a team of Commissioners of the EC to pay a courtesy call on the Council of State in Accra.

The visit was also to help the Commission to know at first-hand the concerns and issues of key stakeholders, regarding the Commission and its operations.

Nana Otuo Siriboe II, Chairman of the Council of State said, “There are regulations that govern political parties and if they are not conforming to the rules, then, their license needs to be revoked.”
He called on the EC to tighten up the process of political party license acquisition to ensure that only serious parties acquired the right.
“The laws make it easy for people to acquire political party license but if the process is reviewed and made robust, only the qualified ones will get the permit.”
Nana Siriboe II commended the EC for undertaking institutional reforms especially in the area of procurement adding that, paying attention to issues of procurement would enhance its operations.

He appealed to the Commission to conduct an inquiry to find out the causes of spoilt ballots and put in place measures to address the issue.

“Over the years, spoilt ballots have been increasing exponentially. The number is huge to the extent that it has been tagged the third political party. It is costing the country so much money especially in 2008 due to the spoilt ballots there was a runoff. It would not have happened if the spoilt ballots were less,” he added.

He advised the Commissioners to be united, work together as a team and take bold decisions to ensure transparent and credible elections.

“We will act as a ‘big brother’ and support your operations to be successful because your position is crucial to the peace and development of the country,” Nana Siriboe II noted.
He counseled the EC not to be demoralized by negative comments by some people and urged them to remain steadfast and bold to work diligently to protect their integrity.
Mrs Mensa gave an account of the various activities undertaken since their assumption 10 months ago and said as a result of a lesson learnt in the Ayawaso West Wogon by-election, the commission had provided security at registration centres for the first time.

Other interventions to be taken to secure polling station would include comprehensive training of security officials who would man the centres.

She reiterated that the Commission was poised to run an open door policy and would give a level playing field to all political parties to ensure credible, transparent, free and fair elections.
She briefed the members about the commencement of processes to build a strong administrative governance structure to correct lapses at the EC.
Source: www.ghananewsagency.org