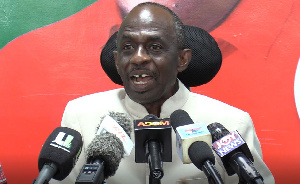 “Asiedu Nketia may be disappointed than I am, after the NDC campaigned for a ‘No’ Vote in the upcoming December Referendum,” according to the ruling NPP General Secretary, John Boadu.

He said he’s no shred of doubt that “Mr. Asiedu Nketia would have opposed to that decision if he were in Ghana at the time.”

In an interaction with host Kweku Owusu Adjei on Anopa Kasapa on Kasapa 102.5 FM, the ruling NPP Scribe said the repercussions of that ‘No decision’ will live with the NDC forever because it has deprived Ghanaians of deciding who to lead them at the local level.

The overriding concern for a NO VOTE for the NDC is to avoid the needless political divisiveness and rancour at the local level, and rather promote unity and cohesion at the local government level among others.

Barely a week after the NDC came up opposing A YES vote and against the partisanship in local government system, the National House of Chiefs also issued a statement calling on Ghanaians to vote same in the December 17 referendum.

But Boadu contends this is the trump card of any coup maker to suggest that multi-party democracy has divided the nation and therefore should be blocked at the local level.

He revealed this was engineered by the so-called experts within the NDC, led by Kwamina Ahwoi.

“It came to us as a shock because I thought we were working together to bring the needed reforms at the local system. They’ve cost the nation dearly; this is a betrayal of trust and may affect the development of the nation,” Boadu bemoaned.