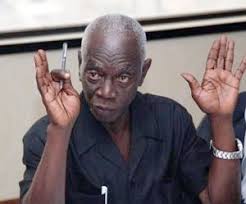 Former Former Chairman of the Electoral Commission of Ghana, Dr Kwadwo Afari-Gyan has revealed that most defeated political parties tend to reject the outcome of election results because of the huge debts incurred.

According to him, most of these political parties go to their financiers with promises of rewarding them in various forms if they win the elections and are given huge sums of money for campaign activities but in the unlikely event they are defeated, they blame the Electoral Commission of rigging in favour of the victors.

He explained that because they may be saddled with debts, they try to find excuses which includes blaming the Electoral Commission for their woes.

“I have suspicion about why they do that, first of all, they collect huge sums of money from people with the promise that when they win, they will be compensated”.
He added that, “If you lose, they must find a way of telling them that they lost because the electoral commission cheated you or somebody did you in. that is one factor and it is true that they collect huge sums of money from individuals, accompanying it with all kinds of promises”.

Speaking at a workshop organised by the West African Election Observers Network in Accra, Dr Afari Gyan wondered why some of the political parties who themselves know they have no the slimmest chance of winning an election will engage in such acts.
Source: MyNewsGh.com/

Previous Kumasi: Motorbike kills pedestrian
Next I have slept with 130 men so far – lady confesses