Fire at Sekyere East District: Jubilee House summons DCE as Youth back assemblymen for her SACK 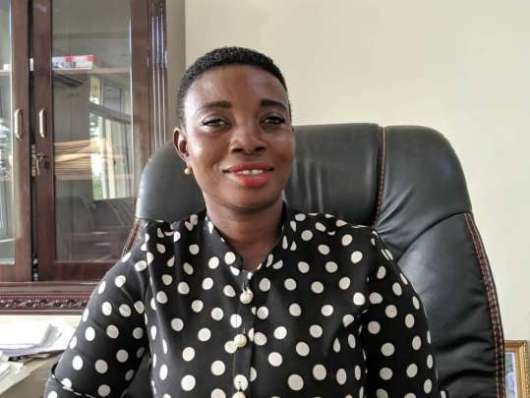 There is a growing tension in the Sekyere East District of the Ashanti region as the youth in the area have begun mounting pressure on the District Chief Executive, Mary Boatemaa Marfo to resign or make available herself to the assembly members for a verdict of no confidence to be passed on her stewardship.

The group, calling itself the Concerned Youth of Sekyere East which claims to have been in existence since 2012 says, much as aspects of the work of Hon. Mary Boatemaa Marfo are commendable, they will not sit aloof and watch her bring the name of the district into “disrepute”.
In a press statement issued by the Concerned Youth of Sekyere East District, signed by its general Secretary, Collins Owusu Nyarko and copied to MyNewsGh.com, claims by a section of the members of the assembly who attempted a vote of no confidence against the DCE have been corroborated.
They cite alleged financial malfeasance in the award of contracts, evacuation of some refuse dumps and the creation of “ghost schools and ghost caterers” to receive unmerited payments from the Ghana National School Feeding Programme among others.

7.   Ntumkumso Presby Primary                Vida Ntiri Boatemaa”
They argue that, “these are the ghost schools created in the district with ghost caterers who were been paid. On the 17th of December, 2018, Dr. Kwame Adu-Nsiah, former National Coordinator for Ghana School Feeding Programme stated in his press release that, “following our reconciliation of the third term payment of files, we notice some anomalies in the data received from the Sekyere East District of the Ashanti Region that;
1.  Schools have been duplicated.
2.  Enrolment figures are inflated.
3. And names of non-existing caterers have been presented for payment”.
“He further went on to say that the Sekyere East District has no school feeding coordinator and that, the Sekeyere East District payment file was sent to the National Secretariat of the Ghana School Feeding Programme through the Ashanti Region Coordinator’s office with authorization from the District Chief Executive of Sekyere East Hon. Mary Boatemaa Marfo”, statement continued.

“A nine-member committee was set up to investigate a refuse dump evacuation issue that came up up during an Executive Committee meeting of the Assembly to delve into the cause of refuse evacuation that has taken place in the District. In the findings of the nine-member committee point number two (2), it states that due process (ie. Official notification to the Assembly Members concerned, advertisement, sale of tender documents, tender committee meeting, evacuation and report and award of contract were not followed before, during and after the evacuation)”.

“Moreover, they also stated that, the District Chief Executive is been accused of contract sum inflation. We are very much surprised and are of the view that these Concerned Assembly Members do not attend assembly meetings and as such they are not privy to whatever is going on in the District. The Assembly’s 2019 composite budget page 24 talks about evacuation of refuse dump in some selected areas in the Sekyere East District cost Five Hundred and Thirty Three Thousand Ghana Cedis (GH¢533,000.00) for these selected areas”.
1.  Daaman (Effiduase)
2.  Etia (Effiduse)
3.  Oseikrom (Effiduase)
4.  Okuase (Effiduase)
5.  Ahmadiyya High School (Asokore)
6.  Salvation Army (Asokore)
“Two other areas or sites namely Asokore and Zongo dumping site and Akwamu (Effiduase) dumping site were included in the Assembly’s budget but these two areas never had a heaped dumping site but rather they were using dumping containers from ZoomLion Ghana Limited but it has been captured that evacuation took place in these areas. A sister District which is the Sekyere Kumawu District Assembly was able to evacuate eleven
(11) Communities’ dumping sites with an amount of One Hundred Thousand Ghana Cedis (GH¢ 100,000.00) in their 2019 composite budget so we are telling the so called Concerned Assembly Members that they don’t know what they are saying”, the statement noted.
ROADS CONSTRUCTION
“The Concerned Assembly Members further stated that, Hon. Mary Boateemaa Marfo lobbied for the construction of Asokore to Ahinsan road, and Effiduase to Tetekaaso road. As a matter of fact, these Concerned Assembly Members have really disappointed the people who voted them to the Assembly because they really know that the District Chief Executive does not construct roads. These two roads they are talking about to the best of our knowledge were solely by the effort of our renowned, workaholic and development oriented Member of Parliament for the Effiduase-Asokore ConstituencyDr Nana Ayew Afriyie and not the District Chief Executive”, the statement added.
In a four-point conclusion, the Concerned Youth of Sekyere East District is seeking the reliefs as follows:

1.  We the Concerned Youth of Sekyere East will like to alert the Presidency, and the Ministry of Gender, Children and Social Protection to tell us why the allegation by Mr Kwame Adu-Nsiah (Former Ghana School Feeding Programme Coordinator) after his suspension in his press release that,  the accusations of crime levelled against him are from the Sekyere East District and not is office have not been investigated. We will be very much happy to know from the Presidency why the perpetrators of the said crime levelled by Dr Kwame Adu-Nsiah are still at post, following his press release on December 17th 2018 while Dr Kwame Adu-Nsiah is still on suspension.
2.  The Concerned Assembly Members should bow down their heads in shame for not doing due diligence before coming out but rather have accepted monies and promises to come and tell us lies
3.  Our Honourable District Chief Executive, Mary Boatemaa Marfo must come out to clear herself from these allegations for her dignity is paramount to us as a people.
4.  Lastly, any assembly Member who will withdraw from signing the vote of no confidence after these hullabaloo will be dealt with accordingly during the September, 2019 assembly elections by the people who voted them to the Assembly and those who are taking monies and promises to preach lies to the people of Effiduase- Asokore should stand firm because we know them all and we are going to deal with them in the coming district assembly elections
MyNewsGh.com is reliably informed that, the DCE for Sekyere East, Hon. Mary Boatemaa Marfo has been summoned to the Jubilee House on Friday, April 12, alongside the executives of the New patriotic Party in the Effiduase-Asokore Constituency to iron out the differences among them.