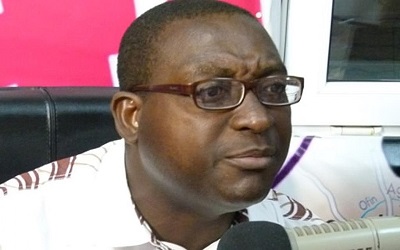 The Communications Director of the New Patriotic Party, Yaw Buaben Asamoah, has urged the Special Prosecutor Martin Amidu to focus on his job and stop complaining.

According to the Adentan MP, nobody within the government is preventing the Special Prosecutor from investigating the galamsey fraud scandal involving Charles Bissue, the secretary of the Inter-ministerial Committee on illegal mining.

A police report into the activities of Mr. Bissue stated that he was not found culpable of any offense of corruption.

Undercover journalist Anas Aremeyaw Anas in a 14-day investigation into the activities of the Committee had Bissue compromising his integrity having accepted cash to facilitate the issuance of license among others.

Other security officers were also caught on tape receiving bribes to allow illegal miners to operate contrary to their core mandate to stop galamsey.

Mr. Amidu on Monday expressed reservations over the decision of the Police CID to probe the corruption allegations levelled against the secretary of the Inter-Ministerial Committee against Illegal Mining.

In a statement, Mr. Amidu said the decision by the Minister of Environment to refer the matter to the police despite the fact that his office was investigating it amounts to an interference in his work.

“The point is, as far as I am concerned, the police have no jurisdiction in the matter, and no minister can refer cases which belong to me to them. The President said he was appointing me so that there won’t be political interference, so, why will a minister bypass me and refer a case to the police?

But in an interview, Mr. Buaben Asamoa said the former Attorney General must go ahead and prosecute Mr. Bissue if he is able to establish a case against him.

“You have power to prosecute politically exposed persons, the matter is on your table, nobody has stopped you from prosecuting the matter…has anybody stopped from him working. Why is he complaining all the time, let him focus on his work, it is as simple as that.

Previous video:Stop your ‘nonsense’ and learn from Ghanaian President – Nigerian actor slams Nigerian gov’t
Next AKUFO-ADDO IS A COVENANT KEEPING PRESIDENT-NANA B