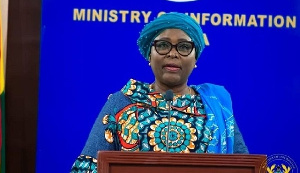 Government may be compelled to close down some markets due to overcrowding and non-compliance to the social distancing directive by traders and consumers, Minister for Local Government and Rural Development, Hajia Alima Mahama has warned.

Speaking in an interview with Accra based Citi FM, Hajia Alima noted that although the directive was being practised in the earlier stages, things seem to have gotten out of hand as several people have thrown caution to the wind.

She observed that there was a lot of overcrowding at the marketplaces leaving little to be desired since it increases the possibility of the rapid spread of the Coronavirus.

According to her, the need to enforce all relevant protocols to contain the spread of the pandemic will be paramount in all dealings with the market vendors.

“There are a bit of complications. Sometimes you see that they are not really practising the social distancing but it’s just about sensitizing them and hoping that they’ll comply. They complied in the initial days. It’s getting a bit more difficult now. On the other hand, too if we find it getting crowded in some areas, we will close those the markets. We may close a few so that we guide them through and if they comply, then we can them let come back,” she lamented.

Hajia Alima, however, patted on the back, traders and vendors who had adhered to the directive so far and urged them to maintain to do so while she craved the indulgence of the others.

“So, we are telling them that they should practice these directives given. If you don’t, we may have to close the markets for a day or two so that they know we are serious and need to comply. But let me add that the market leaders are very cooperative and we get along with them. And sometimes they are also in line with us that if the directions given are not complied with, then the market should be closed for a day or two,” she noted.

In a related development, residents and traders who shop at the Dome Market were left disappointed as Municipal Chief Executive of the Ga East area Janet Tulasi Mensah ordered for its closure over the failure of traders to comply with the lockdown arrangements.

She revealed that the market will be closed from Saturday, April 4 to Monday, April 6, 2020.