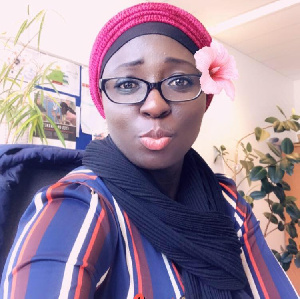 Hajia Ramana Shareef, a Ghanaian lady who was captured by the audit of the Ghana Education Trust fund to have received a total of £22,000 for her United Kingdom education in 2013 did not actually receive a dime, MyNewsGH.com has confirmed.

According to her, although she applied and got an award letter, the fees was never paid which made it impossible for her a secure the admission and to also get a visa forcing her to defer her course twice before she finally cancelled it.

“I got admission to read in 2013 to study MSc Communication for Innovation and Development which was to be a starting point for my PhD dream. I applied for a scholarship at GETFUND, I got award letter but the fees was never paid. I had to defer twice and finally cancelled because of the non-payment of the fees which made it difficult to get a student visa to the UK” she wrote.

“Meanwhile from the look of things, the fees was approved for payment darling …someone thought he/she played a fast one but alas! reckoning is here… we will pursue the fellow to answer to this country” a friend of hers added.

“So this country called Ghana, why at all are we so wicked to ourselves.

You put my name on a list of scholarship beneficiaries, which you never paid! So who took the money?

I am so angry right now. Samson Anyenini, please I need to talk to you urgently.”

Her revelation comes after a performance audit report of the Auditor-General on the administration of scholarships by GETFund revealed that several allegedly undeserving people were given the opportunity at the expense of those most deserving.

Some of the names include now Education Minister Matthew Opoku-Prempeh, Procurement Minister and Deputy Majority Leader in Parliament, Sarah Adwoa Safo as well as the Executive Secretary of the National Council for Curriculum and Assessment (NaCCA), Prince Hamidu Armah.

The Education Minister is listed as studying National and International Security at Harvard University, receiving $12,800 for living expenses and $11,200 as tuition fees.

Dr. Armah is studying Philosophy in Education at the University of Aberdeen, which comes with a benefit of £38,400 for living expense in addition to £33,000 for tuition fees.