The Former Central regional Chairman for the National Democratic Congress, Bernard Allotey Jacobs has said former president Mahama’s “boot-for-boot” comment was a motivational message he personally supports him for.

Mr Mahama who was reacting to the violence at the residence of NDC’s candidate, Delali Brempong during the Ayawaso West Wuogon by-election said the NDC could match the governing NPP boot-for-boot when it comes to violence. 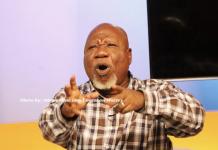 Speaking on Adom FM’s Dwaso Nsem show on Tuesday, Allotey Jacobs said there was nothing wrong with the former president’s comment.

“Mahama only gave a motivational message and I support it because no leader will sit idle and watch his people to be manhandled and since he is going to be the leader of the NDC, it was right for him to say what he said,” Mr Jacobs noted.

Mr Allotey Jacobs attributed the rising vigilantism in the country to unemployment and the need for people to make a living.

He also urged the National Commission for Civic Education (NCCE) to strengthen and increase civic education in the country and not only act when it’s an election.

“NCCE must be equipped to move around, go to the field and every corner of the country to educate the people because their [NCCE] job is not just to supervise elections,” he noted.

Previous Are you proud of what made you an MP? MP to Lydia Alhassan
Next Audio: Shame on you – Allotey Jacobs tells Peace Council chairman