Martin Alamisi Amidu during the Parliamentary vetting in 2018

The Supreme Court has struck out Special Prosecutor Martin Amidu as a defendant in the case challenging his eligibility for the position. 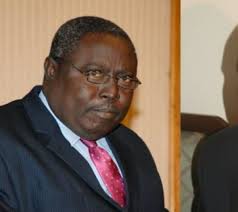 The court said Mr. Amidu was not a proper party to the case as the position in question is one which falls under article 88 of the Constitution which requires the Attorney General (AG) to represent public officials sued as a result of their office.

The court also ordered the AG and lawyers for the plaintiff in the case to file a joint memorandum of issues for adjudication within 14 days.
Former Deputy Attorney General, Dr Dominic Ayine filed a suit at the Supreme Court saying Mr Amidu, 66, is beyond the statutory age of employment into public service.

Martin Amidu popularly called Citizen Vigilante was appointed by President Akufo-Addo as the Special Prosecutor in fulfilment of his campaign promise.
Twenty-four hours to his vetting by Parliament, Dr Ayine sought an order of the court to have his nomination annulled.

In the event Parliament proceeded with the vetting and approval process, Dr Ayine said he would ask the court to annul the appointment.
In his statement of case, Ayine is praying the court to declare that “by true and proper interpretation of Articles 190(1) (d) and 199 (4) of the 1992 Constitution, no person above the age of 65 years is eligible for employment in any public office created under Article 190(1) (d).” The former deputy A-G cited Mr Amidu as a defendant in the case.
But the court on Tuesday said Mr Amidu cannot be a party to the case and can only be represented by the Attorney General, Gloria Akuffo.

Commenting on the court’s decision, Dr Ayine told Joy News he is surprised by the ruling striking out Mr Amidu as a defendant in the suit “because he was integral to the processes leading to the institution of the action.”

“The reason is that he [Mr Amidu] was the one who was nominated and we are challenging his eligibility. The fact that he was nominated and vetted by Parliament and appointed is at the heart of this action that we took,” he said.
According to him, if the president had nominated someone who is 57-years-old, there wouldn’t have been any constitutional issue.
“Therefore, we thought that he was a party to the action but if the court says he is not a party, that’s fine…it does not in any way affect the substance of the action we have brought. At the end of the day, if the court declares his appointment as null and void and of no effect that will be it,” he noted.

Previous Becca welcomes first child seven months after marriage
Next Are you proud of what made you an MP? MP to Lydia Alhassan