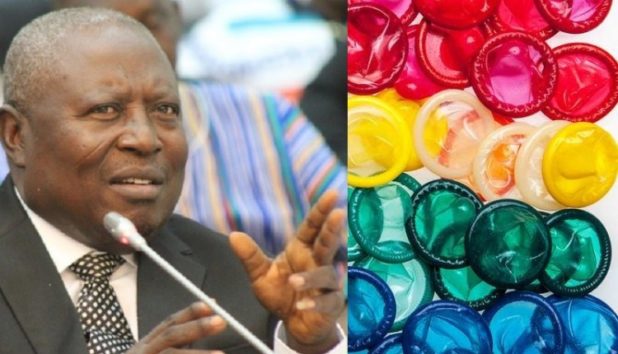 National Democratic Congress (NDC) Deputy Regional Communication Officer Mr. Eric Adjei has announced plans to take on government over a multi-million cedi contract to an Indian Company for the supply of a huge consignment of condoms for national use.

He is set to petition the Special Prosecutor, Martin Amidu over the Three Million, Nine Hundred and Ninety Three Thousand, Nine Hundred and Thirty Ghana Cedis, Thirty Six Pesewas (GH￠3, 993, 930.36) contract, allegedly awarded to Pharmanova Limited, an Indian company by the Ministry of Health for the supply of male condoms.
He made this comment while speaking on Atinka fm’s evening political talk show dubbed Simpieso on Thursday 28th March, 2019 monitored by MyNewsGh.com
Mr Eric Adjei wondered why Government could prioritize the procurement of male condoms with about 40 Billion old cedis at a time that the Central Regional Hospital had threatened not to accept the National Health Insurance card over unpaid claims for the past 10 months with many hospitals and health centres in the country having no beds for patients.
He expressed concern about taxi drivers’ inability to make ends meet because of persistent increases in fuel prices and the deteriorating nature of our roads, leading to road accidents in the country and indicated that these concerns are the ones Ghanaians expect the government to address and not procurement of condoms with unimaginable amount of money.

The NDC executive  further bemoaned the fact that Government could award such a contract to an Indian company, Pharmanova Limited whiles there are a number of pharmaceutical companies in Ghana that can produce these condoms.
According to him, Kiss Condoms, Fiesta Condoms and others produced by Tobinco Pharmaceuticals and Ernest Chemist are wholly Ghanaians companies and that government should rather be encouraging those ones and not to verbally preach usage of Made in Ghana goods while empowering foreign companies.

He reiterated his suspicion of some underhand dealings and threatened to petition the office of the Special Prosecutor to investigate the contract.