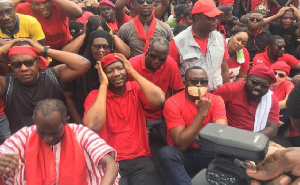 Leaders of the party together with some demonstrators

The Ashanti Regional Secretary of the ruling New Patriotic Party (NPP), Sam Pyne, has described the demonstration of the main opposition National Democratic Congress (NDC) and other smaller political parties against the Electoral Commission (EC) as ‘useless’.

According to him, the NDC has shot itself in the foot for embarking on the demonstration against the Electoral Commission over the compilation of new voters’ register.

Speaking on Okay FM’s ‘Ade Akye Abia’ Morning Show, Sam Pyne alluded to the opposition NDC’s earlier call on the EC to clean up the voters’ register and also update its software, as well as expand its database before the 2020 elections.

Describing the demonstration as useless, Sam Pyne wondered why the NDC after recognizing the challenges in the voters’ register, will turn around to hit the streets of the Ashanti Region against the compilation of new voters’ register.

He was convinced that the main opposition NDC has lost focus after hearing the NDC Deputy Communication Officer, Kwaku Boahen claim that the demonstration is against President Akufo-Addo, NPP and Madam Jean Mensa and her Electoral Commission.

Sam Pyne, however, added that eventhough it is the democratic right of the NDC to embark on a demonstration, they must ensure that no destruction of property occurs in the course of their civil action as the police will deal with them should anything go wrong.

THERE WILL BE NO STRIFE, CONFLICT AFTER 7TH DECEMBER” – PRESIDENT AKUFO-ADDO TO JOHN MAHAMA

Galamsey: You didn’t care; We’re fighting it – NPP to Mahama

JUST In: NPP Parliamentary Aspirant OPK, 4 others injured in an accident