The National Democratic Congress (NDC) has written a surprise letter to the President in response to his directive to the two main political parties to break up militias affiliated to them. 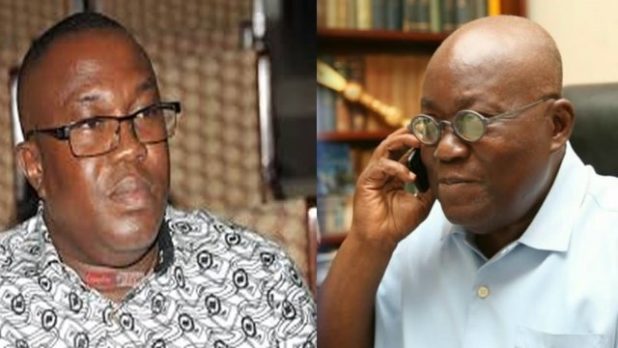 The letter, addressed to President Addo Dankwa Akufo-Addo is coming at a time when the contents of a leaked audio threaten to further divide the NDC and the governing New Patriotic Party (NPP).

Related: Full transcript of leaked NDC audio
In the letter signed by NDC National Chairman, Samuel Ofosu Ampofo, the main opposition party said they will avail themselves “of the opportunity whenever at the pleasure of Your Excellency and at a venue convenient for the purpose.”

The President had requested a meeting only between the two main parties – NPP and NDC.
But the NDC, in the letter, is proposing an expansion: the opposition party wants the discussions to include all political parties, civil society organizations, representatives of the media, representatives of the military, police and other security agencies, as well as any other relevant stakeholders.
Related: NDC Chairman to appear before Police CID Friday
The NDC also proposed the inclusion of a mediator and suggested that a representative from the National Peace Council be appointed for that task of moderating the dialogue between NDC and NPP on breaking up party-affiliated militias.

This is a crucial proposal especially considering the contents of the leaked recording on which a voice alleged to be that of the NDC Chairman is heard indorsing verbal attacks at the Chairman of the National Peace Council.
In the letter, the NDC further proposed the inclusion of institutions like the United Nations Development Programme (UNDP) to assist the National Peace Council.
The NDC, however, asked the government to take immediate steps to disband and disarm the illegal Armed Force being maintained by the National Security Council.

The opposition party also wants the government to abandon its plans and rather instruct its agents in the regions to stop the state-sanctioned recruitment of political party thugs for the purpose of the 2020 general election.
A favourable response by the President and the NPP will advance calls for an end of party militias and strengthen the Multimedia Group Limited’s  #disbandpartymilitiasnow campaign.
Read the letter below.

H.E. The President
Jubilee House, Kanda
I write this as a formal response to the call you made in the Sessional Address you delivered on February 21, 2019, to our respective parties for a meeting to discuss the way forward toward the disbandment of political vigilantism in Ghana.
Your Excellency, in view of the gradual development of this phenomenon in recent years, and the dangerous escalation in which it was manifested at the recent by-election at Ayawaso West Wuogon, we cannot but agree with you in principle that a serious national effort should be made to address this problem once and for all. We will, therefore, avail ourselves of the opportunity whenever at the pleasure of Your Excellency and at a venue convenient for the purpose.
In agreeing to be part of this effort, may I kindly set out the position of the NDC in direct reference to the nature and thrust of your request in order that you may better appreciate the spirit in which we approach this all-important national issue.
Your Excellency may be aware that in the recent past, several civil society organizations, religious and faith-based organizations, political parties and their leaders and even the media, have expressed a worrying and deep-seated concern about this phenomenon.
And as the phenomenon has appeared to take some root in the fabric of our politics, it is only prudent that the call for a disbandment is extended to not only the National Democratic Congress and the New Patriotic Party but all political parties, civil society organisations, representatives of the media, representatives of the military, police and other security agencies, as well as any other relevant stakeholders.
In addition, in view of the often recurrent mistrust and suspicion that characterize such interactions by political parties, and the pain and suffering that vigilantism may have created especially in the recent past, it is of the utmost importance that a mediator with national credibility be appointed to drive the entire process in that regard, my party, the NDC, propose that the National Peace Council be appointed as the mediator for such a meeting.
We also think that the peace council will require as collaborators, institutions that may have unimpeachable knowledge and expertise in providing support for such efforts.
And in this regard the NDC propose that the Kofi Annan International Peacekeeping Training Center (KAIPTC), the United Nations Development Programme (UNDP), National Commission for Civic Education (NCCE) and the Institute for Democratic Governance (IDEG) join the Peace Council to facilitate the process.
Your Excellency, I believe that with these as mediator and facilitators, we can look forward to a robust interaction that can only culminate in a successful resolution of the matter.
I wish to make another observation in order to properly situate the intended interaction between our respective parties in the proper perspective.
Your Excellency has already set in motion a Commission of Inquiry into the incident that characterized the Ayawaso West Wuogon by-election. My party’s understanding of the remit of the commission includes the possibility that it will set out a road map for the resolution of this phenomenon. If this assumption is correct, do we allow the commission to conclude with its report before we engage in our discussion on the same matter, or we proceed regardless of the recommendations of the Commission?
Secondly, we are aware that the revelations at the Commission establish clearly that elements of the vigilante groups apparently sponsored by your party have already been absorbed into the security system, a development that dramatically changes the normal character of vigilantes as we have come to know it, and gives it a real potential for instability as the Ayawaso Bye Election amply demonstrated.
In view of these observations, therefore, may I humbly reiterate the issues set out in a statement my party February 22, 2019, in which we stated that:
a. The government takes immediate steps to disband and disarm the illegal Armed Force being maintained by the National Security Council
b. That the government abandons its plans and rather instructs its agents in the regions to stop the state~sanctioned recruitment of political party thugs for the purpose of the 2020 general election
l conclude this by sending to you my highest regards.
Samuel Ofosu-Ampofo
National Chairman

Previous Ambulance Service appeals for help: U/ER has one vehicle for emergencies
Next US offers $1m reward for Bin Laden’s son