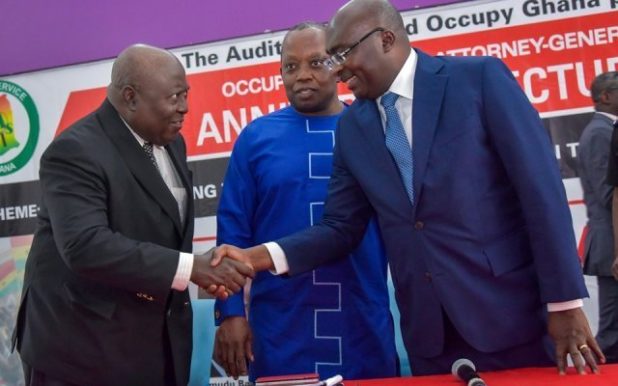 Ghana’s Vice-President Dr Mahamudu Bawumia has said the government of President Nana Addo Dankwa Akufo-Addo is committed to the fight against corruption and strongly believes that leveraging modern technology and formalising the Ghanaian society through digitisation will improve administrative systems, transparency and accountability in the way “we govern ourselves.”

Dr Bawumia said this in his keynote address on Friday, 14 June 2019 at the OccupyGhana v. Attorney General 2nd anniversary lecture on the theme “From Surcharging To Safeguarding: Next Steps In The Fight To Protect The Public Purse”

Dr Bawumia said to fight corruption and protect the public purse, the systems and effective institutions are what matter as well as enforcement of laws.

Dr Bawumia disclosed that through the enforcement of the laws, the Auditor-General has disallowed some GHS5 billion of expenditure.

“So far, we’ve also passed the Right to Information Act, The Public Procurement Authority has implemented E-procurement, National ID Card, Special Prosecutor Act, and we are also resourcing the anti-corruption agencies. All these mean that Ghana is putting in place a sustainable infrastructure for fighting corruption. These are landmark reforms that will stand the test of time,” he added.

Dr Bawumia applauded all bold citizens who keep standing up against corruption and the embezzling of public funds.

Video: SHS students with COVID-19 ‘brought the virus from home’ – Nana ‘B’