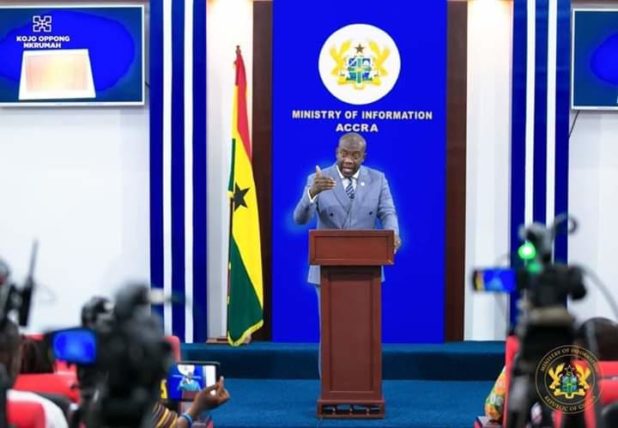 Minister for Information, Kojo Oppong Nkrumah has indicated that the government is set to employ and train six hundred (600) people to oversee the information units in Public Institutions as part of the implementation of the Right To Information Act, ABC News can report.

The Minister made this known during the first level training for Chief Directors from all the ministries on the Right to Information Act. The Chief Directors were being trained in data mapping services in relation to the Right to Information Act. This training will improve the skills and knowledge of these directors as they will lead the data mapping services. In addition, they will also be exposed to the Data Protection Act.
Oppong Nkrumah in his interactions with the Chief Directors noted that the implementation of the Act requires the creation of information desks in all Public Institutions. These information desks require well-trained people to steer this information desks or information units. In view of this, the government has resolved to employ 600 people who will be trained and then deployed to manage these information units nationwide.
He added that the government is committed to providing these officers with the needed logistics that will ensure the effective delivery of their work. Mr. Oppong Nkrumah also announced that all budgetary allocation for the roadmap has been given to the Ministry of Finance for approval. He said once the Ministry approves the budget, it will be made known to the public.
The Chairman of the Constitutional, Legal and Parliamentary Affairs Committee in Parliament, Ben Abdallah Banda who was at the training session added that the RTI law required Government pro-actively provide strategic information to the public without necessarily waiting for someone to apply for it.
President Akufo-Addo earlier this year gave assent to the Right to Information Act which was passed by Parliament. The government is hopeful to ensure that the Act sees a smooth take-off next year.
Source: ABCNewsgh.com