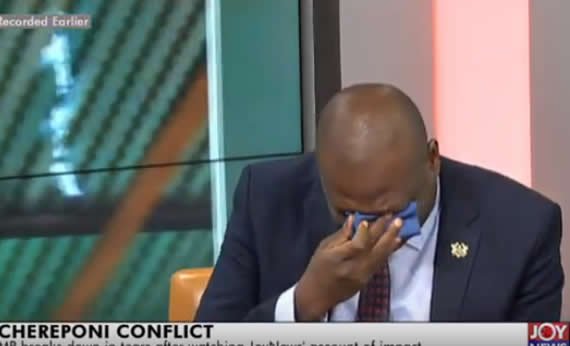 Chereponi, MP Samuel Abdulai Jabanyite, collapsed his head into a handkerchief, crying after watching a JoyNews documentary on the protracted conflict in the North-East region.
The MP had watched several residents tell their stories of their limited options following another round of bloodshed that has left two dead.

Watching the remains of her torched mud home, one woman said every single property her family had gathered have been burnt down – mattress, roof – a photo.

Including a bunch of cassava- her last hope of a decent meal – she kept inside her home.
She had to choose between the cassava and her life that fateful day when she saw billows of smoke announce the restart of violence.

“I called my children and we run,” she narrated to JoyNews’ Gifty Andoh-Appiah.

The woman said residents live apprehensively because there is no forewarning of an attack.

Another man said he cannot find his wife and seven children – 20yrs, 16yrs, 12yrs, 10yrs, 7yrs, 5yrs and 2yrs.
“They run away…I don’t know where to find them,” he said after combing the area. His house burnt down in that moment of madness.

“They were sleeping here with their books,” he said and led the reporter to survey empty rooms with its scared walls of smoot. Foodstuff and clothing all gone.
He said he has been unable to report to the police in an area where security remains porous. The area of the conflict is cut off from any motorable road and is a vast land of scattered mudhouses, making it difficult to security officers to navigate.

Back into the Accra studios of JoyNews, the MP watched the televised documentary on the AM Show Wednesday with Mamavi Owusu-Aboagye.
He said he had returned to Accra after spending several days within the constituency. About four days after his return, fury broke out as Konkonbas and Chokosis began the fourth round of violence in five months.
Recounting the outbreak, the MP broke down.