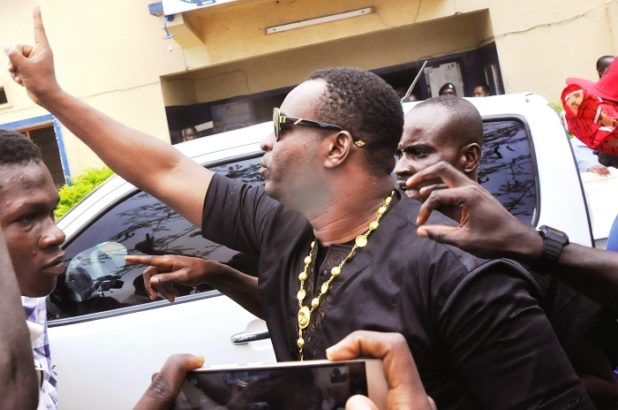 Concerned Patriots of Mampong Constituency in the Asante Mampong Municipal of the Ashanti region ,  have vowed not to allow the Ashanti regional  New Patriotic Party (NPP) Chairman, Mr. Bernard Antwi Boasiko, popularly known as Chairman “WOMTUMI” to impose a parliamentary candidate on them.

Read the full statement by the concern group:

*WONTUMI CANNOT IMPOSE A PARLIAMENTARY CANDIDATE ON US*

We welcome you all especially our friends from the media for honoring our invitation.
We have noted with great concern the undemocratic developments that is gradually building up in our constituency as we all prepare for election 2020.
We strongly agree that the 2020 General Election is a straight fight between our great party, the New Patriotic Party and the National Democratic Congress in deciding the destiny of our dear country Ghana. For this reason, it requires the party to prepare thoroughly with all our strength and people that matter so we can retain power and continue to deliver on our promises.

Again, it will require that party ensure the greatest form of transparency in electing candidates to contest for parliamentary seats in all the 275 constituencies which the party has done with respect to the constitution.

More importantly, it will also be imperative that Party Leadership resist any form of support or conduct that depicts favoritism for any candidate against the others as parliamentary primaries draw closer

Ladies and gentlemen, our respected friends from the media, on the 13th of October, 2019, our Regional Chairman, Mr. Benard Antwi Boasiako (alias Chairman Wontumi) in a speech at Kofiase passed some comments which we deemed unfortunate and a clear declaration of support for the incumbent MP, Hon. Kwaku Ampratwum Sarpong against other competent party members who have the dream of contesting in the upcoming parliamentary primaries. We want to repeat again that the comments made by our Regional Chairman is “UNFORTUNATE” LAWLESS, a breach to the Party’s constitution and we shall resist it with our last blood.
We want to make it clear to our respected and hardworking regional chairman that aside “FREE, FAIR and TRANSPARENT ELECTIONS”, we shall resist any attempt to impose any candidate on us.

We believe it was through elections that Hon. Ampratwum got the opportunity to lead the party in this constituency. If he must be retained or disposed it must be through the same process.

If our Regional Chairman feels that the incumbent has done enough work and demands that he should be retained, why the fear of FREE, FAIR AND TRANSPARENT” primaries?
As the saying goes, “wo nnwumapa na 3b3di woakyi”, also “amfo na ekyer3 ne ntoaso”literally translated, “your good works will follow you”.

The regional chairman may succeed in doing this imposition in other constituencies as the case may be but not in Mampong constituency as the rules that govern the party stipulate.

We humbly plead with our highly respected Regional party Chairman and all other executives to disassociate themselves from any act of imposition which end up distracting party unity and cohesion after elections. He should also not forget that after his proposed imposition of parliamentary candidate there will be general elections that would see his preferred candidate in parliament and that can’t also be forced on the constituents.