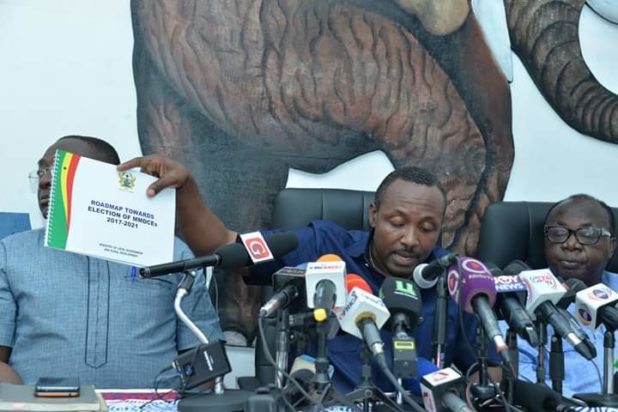 The New Patriotic Party (NPP) has rallied for support for a ‘Yes’ vote in the upcoming national referendum, stating that, it will do away with the ‘winner-takes-all’ syndrome that is at the bottom of much of the acrimony in Ghana’s politics.

Addressing a press conference in Accra on Monday, the General Secretary of the party, John Boadu, also allayed fears that the referendum will be to the advantage of the ruling NPP.

“There is no inherent advantage for any party but for the Ghanaian people and the quality of leadership and public services they get from their local government. That is why we begun on a platform of a consensus and it cannot be said that this entire Constitutional Reform exercise is to benefit one political party to the exclusion of others. Indeed, it is rather the current status quo which favours one political party or at best the two main political parties to the exclusion of all others,” he stated.

According to the NPP’s General Secretary, if partisan advantage was the intention, the President and his party would not be leading this exercise to give up on his constitutional powers to nominate all Chief Executives of all Assemblies.

Though the main opposition party, National Democratic Congress (NDC) is advocating for a ‘NO’ vote, of which the NPP describes as hypocritical, judging from the earlier stance, Mr. Boadu said, the NPP will nonetheless, stretch a hand of friendship and appeal to the NDC.

“We will appeal to the NDC to put the national interest first. The NPP is fully behind the President’s programme and the people’s desire to democratize local governance and enhance accountability at that level. We are also happy to hear that Government intends to continue engaging the NDC and other stakeholders to get this important exercise of strengthening governance at the grassroots fully back on track,” he said.

He added, “we also call on all patriotic citizens, including followers of NDC and other parties, to do what we all know to be right and support the “Yes” campaign.”

The NPP’s General Secretary ended his statement by reinforcing that a vote for ‘Yes’ is not just an NPP agenda but a national agenda.