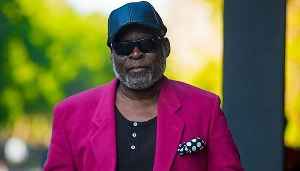 The Film Producers Association of Ghana (FIPAG) has said veteran actor Kofi Adjorlolo has presented to the outfit names of two out of the seven producers he claims owe him.

James Aboagye, president of the association, in an interview on Hitz FM’s Daybreak Hitz mentioned that the two are not members of FIPAG.

“He has given me two names so far and those producers are not even FIPAG members. We would issue a statement. We have to let people know,” Mr. Aboagye noted.

Prior to this development, FIPAG had asked Mr. Adjorlolo to render an unqualified apology to the association for denigrating it or face its wrath. The veteran was expected to apologise within 14 days.

Adjorlolo had in an interview expressed fury over some movie producers’ refusal to pay him after they engaged his services. Having quit his broadcasting career after 17 years to venture into acting, the least he expected was to be treated unfairly.

“Some of the producers in Ghana here, they should respect themselves…old man like me, they call me to come and work and they can’t pay me…,” a seeming frustrated Adjorlolo complained.

What irked him the most was the fact that he is said to be worth $800,000 when in actual fact, he has been starved for years. While stating that many Ghanaian movie producers do not pay actors for their roles in movies, the veteran intimated that a number of actors are still in the business because of the passion they have for it.

“About seven producers in this country owe me monies…why? And then I’m sitting at home, I’m hungry, and then when I’m sick too nobody pays attention,” he fumed. “Look we have elderly people lying down on their sickbeds and these producers owe them. Actors in Ghana here know what I’m talking about, these producers don’t pay!”

Barely a day after Adjorlolo’s outburst gained prominence, FIPAG issued a statement condemning the actor for “casting a slur” on the association. They expected him to “use internal structures” and demand what is due him. FIPAG further said Adjorlolo should have mentioned the names of his debtors rather than leaving people to wonder who these seven persons are.

The caution was criticised by several industry players as they suggested that FIPAG goofed. They argued that Adjorlolo did not in any way put the name of FIPAG into disrepute since he was addressing his debtors and not the association.

Already expired voter register can not be trusted- Ras Caleb

Already expired voter register can not be trusted- Ras Caleb

‘Beyond the Return’: Govt to make Ghana a place of pilgrimage [Video]