Ghanaian actress, Yvonne Nelson has vowed not to date any Nigerian man after what transpired between her and Nigerian musician Iyanya, MyNewsGh.com has filed. 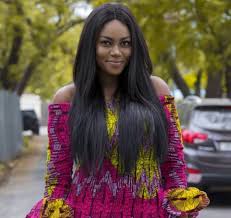 The actress who had placed an announcement on her instagram page for a date said she was shocked no one contacted observing it could be possible her fans and potential suitors did not believe she was indeed ready for a date.
Asked the kind of man she is looking for she told Yvonne Okoro “You mean my post? No! No!  No one reached out to me…maybe they don’t believe me. It is what it is. I am looking for one. Infact get me one in Ghana”
Pushed to give specifics as to whether she loved Ghanaian suitors or Nigerian, she replied that any but later said she is done with Nigerian men considering what she went through in the hands of Iyanya.

“As for Nigerian men I am done”, she said while being mocked by John Dumelo who started singing some lines of Iyanya’s all I want is you waist.

It was not until after last year when the Nigerian artiste explained the reason for their break up though it was rumored he was just in for the Ghanaian actress’ waist.

“We broke up because we hardly had time for each other. I was hustling and I would do four shows in a day and I will make 2 million. So, I won’t say because I was in love with a woman I’m going to see money and I’m going to lay back.”
Source:MyNewsGh.com/