Actress and movie producer Yvonne Nelson who led some Ghanaians which many people believed to members or sympathizers of the ruling party to demonstrate against the Mahama led administration for the rampant power outages popularly known as “Dumsor”. 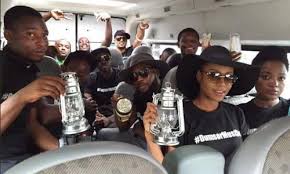 Yvonne Nelson who would be appearing on this week edition of Yvonne Okoro’s Dining with Cook and Braggart alongside her best friend John Dumelo used to opportunity to clarify some issues that have been on the mind of people that she was NPP and was paid by them to lead the demonstration.
Dumsormuststop
According to the mother of one, she was not paid by the NPP to carry out the demonstration but she rather risked her life and career to be the voice of the voiceless that was why she brought that up and added that the NPP can never pay her moreover they don’t care about her.
John Dumelo who is a known NDC member mocked her by using the phrase “Had I known is always at last” to which they all laughed about it.