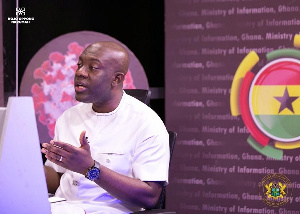 The minister of information Kojo Opong Nkrumah has joined other well-meaning Ghanaians to condemn what appears to be a rationalization of rape.

He took to Twitter to write: “Rape and violence against women is not something we should joke or toy with. We need to develop a more robust environment for protecting our wives, daughters, sisters, and mothers.”

The minister’s statement came on the back of an ongoing controversy following a widely condemned claim made by controversial counsellor George Ludtterodt that rape victims enjoy the assault at some point before it ends.

His comment has attracted widespread condemnation with some media houses declaring him unwanted on their TV screens and airwaves but he still stands by his statement.

Speaking to Andy Dosty on Hitz FM, he said: “what is going on is not about me, people now are doing media ‘content-ship’ and we those who have the voice when we grant the option of interviews to relevant media houses and they make headlines then others will want to pick it up so they could make some small appearance with it.

“If you watch the video and listen to the issue carefully, clearly put you can see that the statement is a sensible statement from a defending educated elite spiritualist,” he said and added that it also means Multi Media’s contenders “watch us”.

Tags against information minister should something violence women