Shatta Wale got his ‘Paah paah paah’ from my name – Patapaa 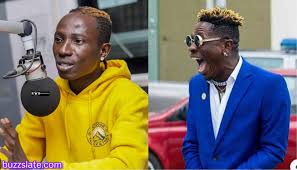 Agona-Swedru based hiplife artiste Patapaa has stated that Dancehall artiste Shatta Wale got his new term “Paah paah paah” from his name after he had released his Skopatumana song.

Shatta Wale’s new term has been of interest to some music lovers claiming he copied it from his first rival in the music industry Samini because he used the term in one of his previous songs.

But the “One Corner” hitmaker is of a different view that Shatta rather got his term from him because he has said time without number that he likes his(Patapaa) songs.

In an interview with Abeiku Santana, Patapaa disclosed that Shatta Wale once said he takes inspirations from his songs that even made him produce his “Freedom” song.

“It’s true, Shatta Wale himself has said it over the years that i’m one guy that motivated him to also try some new stuffs. He came out during my One Corner days to say he took inspiration from me to also do his Freedom song.”

He went on to say that say Shatta Wale loved him he took the last three letters of his name ‘paa’ and added ‘h’ and that was how he was able to get his “Paah Paah paah” term.

Watch his video below: